NORWAY's own heavy metal Thor, Jorn Lande, returns with a new album of cover versions ranging from Kate Bush to Iron Maiden entitled 'Heavy Rock Radio'. But does the album deliver as much hammer as Thor’s hammer Mjölnir


Starting with Frida's (the dark haired one from Abba) 'I know There's Something Going On' didn't initially inspire much confidence but Christ does it rock! The structure of the song totally lends itself to the heavy metal treatment and witg heavy, filled in riffs and an excellent solo from Trond Holter - it's an encouraging start.


Messing with teenage wet dream Kate Bush's song 'Running Up That Hill' in principle shouldn't have worked but he bloody nails it. Loaded up with guitar, bass, drums and Jorn’s raspy vocals it's like a totally new song. 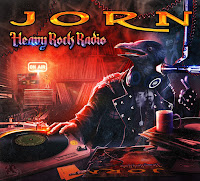 Foreigners 'Rev on The Red Line' still has that Foreigner feel to it but with a much heavier sound and the synths pushed firmly into the background.


So far, so good, but John Farnham's 'You’re The Voice' throws up the first issue. The arrangement is excellent and it really works with a heavy guitar influence but those guitars are used  to replace part of the vocals on the chorus and this lessens its impact. Thankfully this is put right in the second part of the song but it could've been so much better the whole way through as Jorn’s vocals are excellent. Didn't really need to turn the pages over....


The pop rock offering of Paul Stanleys 'Live to Win' is in much need of a boot up the arse and gets it here. Much heavier with a Scandanavian/ European vibe to it, this version is much better than the MTV-era influenced original


Okay, 'Don't Stop Believing' has been done to death.....but not like this! Leaving out the piano and focusing on guitar with the bass playing the lower tones the piano normally would play, Lande sticks rigidly to the songs structure but his raspy vocal delivery breathes new life into it.


'Killer Queen' is up next. There are some Queen songs that would be better suited to getting the heavy treatment (Don't stop Me Now springs to mind) but this one should probably have been left alone. It's not that its bad but as Jorn himself says on the liner notes:"I'll let the listener decide if the outcome was auccessful" This version could cause more social media chatter than the Brexit vote!


Covering the iconic Eagles tune 'Hotel California' may well be sacrosanct in some quarters but thankfully they did as its an absolute belter of a version. Staying close to the original and keeping it fairly simple there is a whole new dimension to this song. A much more menacing vocal delivery gives it depth and the guitar outro is just killer. Album highlight so far.


Anyone familiar with Lande’s back catelogue will know he's at his best when he takes on Ronnie James Dio and David Coverdale. His Dio cover album and the ‘Snakes' Once Bitten album are perfect examples. So, the fact that this version of 'Rainbow in the Dark' is superb is no surprise. It maintains all the elements of the Dio original but with a much heavier sound. The trick with singing an RJD song is to try and get his unique phrasing and pinched off vocals correct and Jorn manages to do this really well without sounding like a copycat. Great version of the song.


Surprisingly Iron Maiden get the full Jorn treatment with his offering of 'The Final Frontier'. Sans the snoozefest that is Satelitte 15 as an intro the song is tighter. Jorn does an excellent job on the vocal without ever trying to sound like Bruce. It probably misses the trademark Maiden three guitar sound but it's still an excellent version.


'Stormbringer' is song that sees Coverdale get, err, covered. It’s another outstanding version as Jorn is right in his comfort zone singing this stuff.


Album closer 'Die Young' is a great effort at a Dio-era Sabs song. There are no dramatic changes to the original just cleaner vocals and new, original and energetic guitar parts. A great way to finish the album off.


Overall this is good fun and a damn good listen. Personal choice will always dictate favourites but it's worth getting to discuss Killer Queen alone.
Review by Andy Gillen
Posted by Jonny at 2:03 pm