NEWS: The Crawling, Rabid Bitch Of The North and Zlatanera speak ahead of Bloodstock slots

WITH a mere three weeks until festivities get underway for Bloodstock, we caught up with the three Northern Ireland bands as they get final preparations underway to decamp to Catton Park.

Metal2TheMasses NI winners, The Crawling are already running a BOA competition via Facebook and this is what they said when asked about their appearance at the Hobgoblin New Blood Stage. 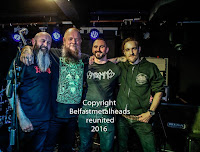 "Every now and again, when you are in a band, something cool happens; and then there's playing Bloodstock. It's just brilliant to be part of such an iconic UK festival - we can't fucking wait!"

For Rabid Bitch Of The North they are returning to what has proved to happy metal hunting grounds, and have gained an ever greater exposure in the UK after a mini-tour on the mainland a few weeks ago.


“Bloodstock Round Two is what I’m calling it in my head - our second chance to impress and even larger audience than two years ago,” said singer and bassist Joe McDonnell.

“I think I only got really excited when Bloodstock officially announced us, and I read all the really positive and encouraging feedback on loads of different forums online.”

Joe continued: “People who had seen us on BOA 2014 and those that had heard of us. Any new audience and stage away from home is exciting to play, but the New Blood Hobgoblin Stage will be immense this year.

“It’s the dogs balls to be on the same bill as Twisted Sister (last ever UK show), Venom, Anthrax, Slayer, Diamond Head, Phil Campbells Band, Acid Reign, and the list goes on. The line-up is what Id call actual Heavy Metal this year and we fit right in.”

Satan’s mates, Zlatanera, are all set after this week’s official confirmation of their slot at Bloodstock. Bassist Anthony McKee summed up the band’s thoughts ahead of their appearance. 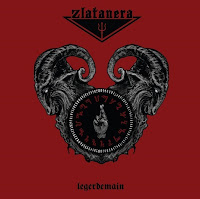 “Zlatanera feel privileged to be a part of Bloodstock 2016, playing the Jäger stage,” he said. “This will be our first gig outside of Ireland and what better way to make our mainland UK debut, than at one of the most prestigious and diverse metal festivals.


“We look forward to treating Bloodstock to our familiar blend of riffs, immersive rock and songs about the devil and hope to see an unquantifiable amount of horns being thrown and heads being banged. This is going to be good/evil!”

Bloodstock are you ready for this trio of Northern Irish monsters stamping their way towards you?

Email ThisBlogThis!Share to TwitterShare to FacebookShare to Pinterest
Labels: Bloodstock, Bloodstock Open Air, Rabid Bitch of the North, The Crawling