Crystal Lake's new release show metalcore's star has not waned, it is certainly not dead, and it can have some heavy hitting bands carrying the flame.

This album is by no means perfect but is a fantastic addition to their back catalogue and has the meat and melody to showcase these Japanese potential superstars trajectory today and in the future.

The brutality begins with opener 'Aeon'. This sees the band delve into the world of deathcore, Heavy chugs and guttural vocals. The song hits hard and the lyrics see a dystopian future where technology codes our lives, nearly worshiping it.

You might even say that it’s happening right now. For an opener this is one of the best songs on the album, but there is many more to go alongside this behemoth. 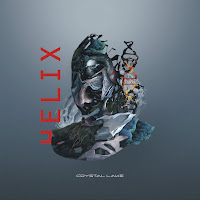 Right after that comes another brilliant song, 'Agony'. It is still as heavy and as crushing as aeon but is definitely much lighter going back to the stylings of metalcore. The standout aspect of the song is really the melodies which quite honestly makes this song the best song on the album and hopefully a staple of what's to come in Crystal Lake's future.

The album continues with another solid track '+81', and we’re only on track three! Another great song but this follows a more nu metal style and mixes it with the heavy drums and guitar in a way that shouldn't works but does so extremely well. The bass even gets a solo! This song is fun more than anything, lots of head banging to be had here!

'Outgrow' is is a much slower track but by no means is it any less heavy, it gives the chance for some incredible writing. The standout part of the song is the small but effective solo and it fits in so well.  This track slows the album down but the flow is still on point.

Onto a weird one, but a pleasant surprise none the less, 'Hail to the Fire'. It sounds as if Soulfly took to becoming a metalcore band, which is to be brutally honest a good thing! An amazing track with a unique sound for the metalcore scene at least. If there was another song like this, there wouldn’t be many complaints.

To close. This album will be for many a stand-out release for 2019 so far.

Crystal Lake are shooting the stars and they’re certainly on track. If they keep this up they will hopefully reach an even wider audience as they bridge their metalcore roots and their heavier inclinations. 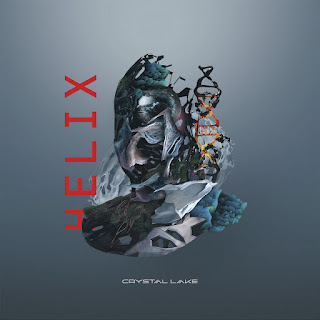 Posted by Jonny at 5:47 pm No comments: Links to this post

ALBUM REVIEW: Gasoline Outlaws outrageously passionate and powerful on Light Up The World

AHH, the tricky second album...when you've exhausted all your familiar live tracks carefully honed over years on your début and now you have to get it all straight for album number two. But Gasoline Outlaws have taken the 'tricky' cliché and shoved it into a mind-meld of pure hard rock joy.

Yep, buckle your hard rock heart in, because 'Light Up The World' is going to take your perceptions to another level, bringing compassionate, socially aware lyricism and muscular music. 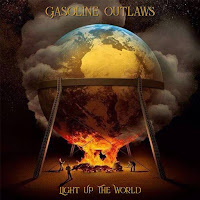 Live Gasoline Outlaws have always had the chops, as you would expect from four experienced musos, and with their first release 'No Rules, No Laws, No Regrets' such a passionate statement coming up with similar for 'Light Up The World' was bound to be a challenge.

Aye, dead on - because this pure bred rocking four-piece accept the challenge and take it to another level.

Not much of a challenge with the collection of songs aired here. Fuck you second album doubts as this is strident; this is thoughtful; this has fire and tenderness; this elevates the soul; and this causes all to examine their own reactions to love, life and this fucked up world.

However, for those expecting the same instant hit as when they released their first, be prepared to give this album more time. It's not that there are not songs that grab you from the off: rather that there are so many more layers and nuances.

The opening drum and bass combo to the title track is a statement in itself before the four-piece clicks into a rage against the prevailing selfishness on Planet Earth. Adam riffing as Matt urges us all to be the better person in the field of bastards scourging daily life.

It is not the only socially aware track, but from the off the match between the music and the message has heads nodding, not like slavish morons, but as people who can form their own thoughts.

And, for this album in toto it is clear that Gasoline Outlaws have matured as a band with their own vision and the preparedness and courage to take on new sounds that complement their own drive.

Adding the keyboards and textures of John McCullough on selected tracks and the backing vocals of Amy Montgomery (on the tremendous 'Better Days Coming') shows that the band knows that they can - and must - stretch themselves to elevate GO beyond the pack.

This is best demonstrated on the closing track 'Hard Times' as Ryan beats out an almost militaristic rhythm as it builds: Adam and Chris keeping a timing that is insistent and compelling as Matt's tells a tale of woe and hope.

'Psycho' is a vehement anti-violence diatribe, while 'The System Is A Lie' opens with an almost Neil Young vibe before the band takes the screwed up political and brainwashed world to task in an unbelievably catchy commentary on where we are in 2019.

However, they also prove on 'Where We Started' that the lyrics can show that they can be introspective and tender, no schmaltz, no overblown sentimentality, just emotions, wrested from Matt's voice and Adam' balanced solo echoing the sensibility.

On a similar note 'Executed' has that same introspection that will resonate with many a listener: and let's be blunt here had this been released by some jumped up manufactured boy band it would be playlisted on Radio Two, with feature slots on The One Show and Graham Norton. Little do these numpties and bampots realise that it takes a rock band to write and record songs this good.

It is as well it is followed up with the stomp and strut of 'Breathe Again' lest you have 'Executed' on repeat and crack open a bottle or six of wine. 'Breathe Again' will have you hoisting the bottle of bourbon in the air - demanding another swig as you implore the ones you care for to care the same way; and stick a middle finger up to the doubters and chancers.

While there are so many defining moments on Light Up The World it is the defiant statement on 'Fight For One More Day' that helps espouse the ethos of Gasoline Outlaws - and all of the marginalised. You can kick us, doubt us, sneer and backstab but we'll be back, we'll kick back and we'll show our worth...as Metallica say "fuck it all and fucking no regrets".

There is a sense here that Gasoline Outlaws have been more than just 'thoughtful' in preparing this release; a maturity in the approach and a willingness to listen and learn to deliver a collection of songs that will have many baying for their live renditions.

Cormac Neeson's input, Amy's backing vocals, John's keys and, the magic touch of Frankie McClay of Einstein Studios NI have elevated Matt, Adam, Chris and Ryan to the next level.

This album will Light Up The World of every true rock fan and deservedly so.

Pledgers will have already received their copy. Light Up The World will be released on April 5th. Pre-orders are available here.

The official launch takes place at the Diamond Rock Club on May 4th, with support from Baleful Creed. 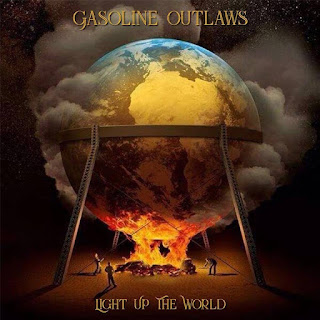 Posted by Jonny at 5:21 pm No comments: Links to this post