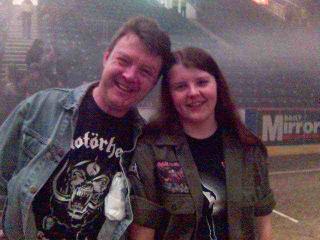 All hail the brothers in metal...okay that's enough of any Manowar-like statements! Here's to all who turned up to see The Scorpions and Judas Priest at the Odyssey on 24th March, 2005. Gr8 to see Mark & Syliva; Michael; Eddie and cheers to Raymond and Sid who were there, but we didn't get to see (despite confusing and sometimes surreal phone calls to Sid's mobile)

[See pic of an ugly fucker (me) with his daughter about to launch into yelling and bouncing about to The Scorps. Ta to Mark and Sylvia for the pic!]

Personal thoughts were that it was a superb set from Scorps (Hail Rudi, the man with the widest gub in metal!) but the sheer over-the-top show from Judas Priest just edged the day!

Halford may be an old queen, but what a voice! At times KK and Glen seemed to struggle with some of the solos, but it gave a human touch to the proceedings amidst such a forbidding stage set.