Ok, this is insane - every year there's a festival of diddly dee music in Castlewellan. Mostly it;s beardy types with aran sweaters. Then I found this post cropping up on a couple of sites:

Fusion Rock Night
4 August, 9.30pm
Maginn's Bar, Castlewellan
Admission: £3.00
The charismatic, highly charged and highly talented rock band “The Answer” perform a debut genre for Celtic Fusion 2006. Down District’s very own rock group have made it big in the last few years with growing press hype and numerous awards, the band headlines at the 'Kerrang Most Wanted' tour in May.£3.00 payable at door.

Now anyone who has been in Maginn's and anyone who has heard The Answer's new album Rise, should know this is wrong, wrong and just silly that a band that is destined for stadium's should appear here....now what's the Ulsterbus you take to Castlewellan?
Posted by Jonny at 12:27 am 3 comments: Links to this post

Lorra, lorra gigs coming up in the autumn

There's a lorra, lorra gigs coming up in the autumn. Deep breath here: The Answer in September (if you haven't bought the album, do yourself a favour and buy it now!) Motorhead & Therapy? at the Point on Hallowe'en Night, Slayer's Unholy Alliance II - Preaching to the Perverted with In Flames, Children of Bodom and Lamb of God on Nov 5th in the Point, not to mention Iron Maiden and Trivium on December 20th!
Posted by Jonny at 11:33 pm No comments: Links to this post 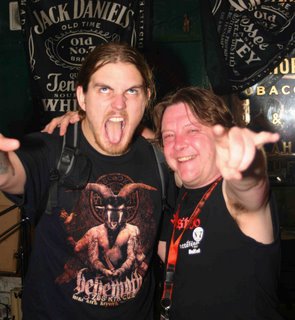 Been a while since I posted. Sorry. I offer grovelling apologies. Lot to catch up on - not least the Rottfest review. For now.... one of these people is a guitarist with Devildriver...the other isn't!
Posted by Jonny at 11:27 pm No comments: Links to this post