OF the so-called Big Four of thrash, Anthrax have always been under-rated, but at their recent Limelight show they showed a power, prowess and passion with an intensity and joy few can match.

After the travails and turmoil of previous years this line-up seems to have nailed the Anthrax sound.

Which is why it will be so intriguing to hear first hand from no less than Scott 'NOT' Ian. The outspoken guitarist and band spokesman and leader is undertaking a spoken word tour, with a date at the Limelight 2 pencilled in for June 6th next year: D-Day no less!

More details of Scott's Speaking Word tour when we get it!

Posted by Jonny at 6:16 pm No comments: Links to this post

IT is a privileged position to be able to receive and listen to albums forwarded to us and review those that we deem worthy. Unlike the magazines we haven't the staff to review all of the titles sent through, but occassionally one drops into the inbox and we go - "hold on this is pretty good, but who the fuck are they?"

Hence when we read the blurb about Giant X we hadn't a bloody clue who they were or what to expect for their début release on Steamhammer/SPV. But ignorance aside this platter of Teutonic hard rock is damn good - not ground breaking, just damn good.

Clean production, riffs a plenty and a varied pace and nice take on classic NWOBHM and twin guitar attacks.

Going by the highly original title 'I' Giant X have a wee classic rock vibe that will put a smile on the those who need a wee lift on the dark nights of winter. We're sorry, but if the track 'The Count' doesn't have you grooving your aural senses need a re-boot.

However, the radio-friendly vibe of the 'The Count' is only one side of Giant X. This is the vehicle of Rolf Kasperak and Peter J. Jordan, who is probably best known for his role in Running Wild. 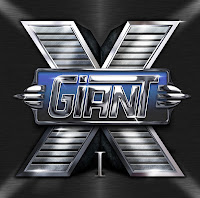 The 12 track album displays a versatility with hooks that get right deep into your brain and meaty choruses.


“Our material consists of consciously multi-layered numbers, more in the tradition of Kiss, Queen, Billy Talent, Thin Lizzy and Van Halen, in other words: rock music in the tradition of the seventies, eighties and nineties – our shared musical roots. The main thing for us was that people would be able hear the lightness and spontaneity of our collaboration,” Jordan explains.
Compared to Running Wild (we did some quick revision to make sure we were right about the derivation) Giant X have a wider range of source material to draw upon. At times there is a hint of blues riffing to offset the power metal rock range with 'Badland Blues' hinting at having listened to a wee bit of Cinderalla in the past. Set along with that is the likes of the mid-paced groove of 'Friendly Fire' and the balladic 'Nameless Heroes'.
And, we make no apologies but 'Let's Dance' makes us crack open a beer, pour the bourbon and party.
Giant X display a range of talent, while at the same time are able to plunge deep into a range of influences without being slaves to the past. Fashionable - probably not. The scenesters and metal snobs will hate it. But for the rest of us, get down, and get rocking to Giant X.
Giant X release 'I' on Steamhammer/SPV on January 18th 2013 in Germany and the rest of us have to wait until January 21st

Posted by Jonny at 3:54 pm No comments: Links to this post