Upcoming gigs at which you may chose to rock out, mosh, air guitar, or boogie like someone who has made recent aquaintance with Jagermeister...

You know of other dates? Let me know by posting a comment of emailing
Posted by Jonny at 12:31 am No comments:

OZZY GOES TO WEMBLEYOzzy Osbourne is to play Wembley Arena in London on June 19, supported by Black Label Society....wonder can we all nag Zakk to play a warm-up in Belfast!
Posted by Jonny at 8:19 am No comments:

Neon Knights, Lonely is the Word, Sign of the Southern Cross etc...

Heaven And Hell (a.k.a Sabs with Little Ronnie!) have confirmed they they will only be playing songs from the Dio era of Black Sabbath on their upcoming world tour - source for this Totalrock.com.

"The band - vocalist Ronnie Dio, guitarist Tony Iommi, bassist Geezer Butler and drummer Vinny Appice - will put together their live show from the 'Heaven And Hell', 'Mob Rules' and 'Dehumanizer' albums, plus three new songs written and recorded for the upcoming compilation album 'Black Sabbath: The Dio Years'." is the quote from Total Rock. Well right now can I put in a bid for an extended version of 'Lonely is the Word' to be in the set-list.

Oh, yeah, forgot to say the bidding is underway to see if they will play in Ireland as well as Monsters of Rock. Oh, yeah forgot to say that Ozzy is planning a brief festival tour of Europe at same time - so desperate to reclaim his spot he's even planning an appearance on the bill with Iron Maiden. Just keep Sharon and Bruce apart ffs!
Posted by Jonny at 11:18 pm No comments: 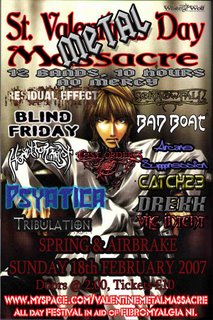 After her hard working set supporting The Darkness last yearm Juliette Lewis & The Licks have signed up to play Belfast again at The Spring and Airbrake on May 2nd. An interview with Juliette appeared in last week's Sunday Life can be read here. Tickets on sale now.
Posted by Jonny at 1:26 pm No comments:

Veteran rockers and hard rock pack leaders throughout the 70s and early 80s, UFO, have set a a date for Belfast - their first since...1979

Phil Mogg and Pete way will be bringing back the epic sounds to the city's Spring and Airbrake on March 23rd.

And for a band formed in...1969 they're still producing relevant music, last year's Monkey Puzzle CD not only scored excellent reviews, but made it into several magazines top 50 reviews of the year.

And for younger readers who may not understand the appeal of the band they bridged the hard rocking 70s and the New Wave of British Heavy Metal, thus influencing many of today's acts check out their Wikipedia entry here.

Tickets are priced £20 and available from Katy Daly's and usual outlets.
Posted by Jonny at 12:28 pm No comments:

Don't forget SOiL are playing at the Spring & Airbrake on Wednesday night with Godhead, Brand New Sin and Lennon - see y'all there!
Posted by Jonny at 1:09 am No comments:

There're reports the Belfast Soil/Godhead/Brand New Sin/Lennon show tickets are not on sale yet - not true! 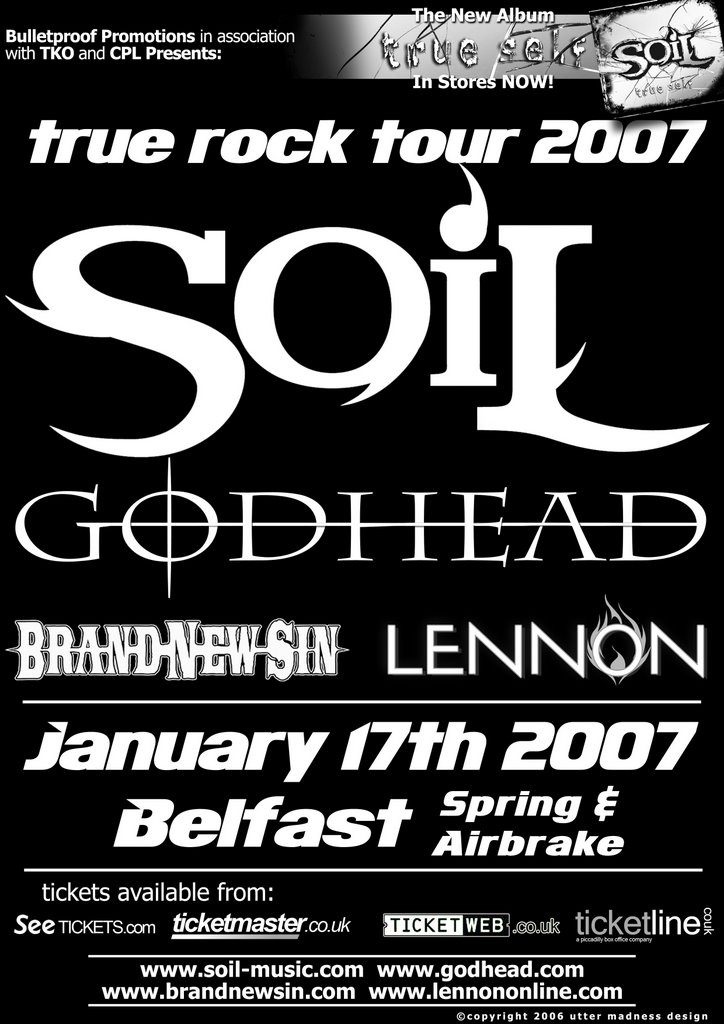 motions@hushmail.com to let the promoters know if you are having problems obtaining tickets.
Posted by Jonny at 12:35 am No comments: