COME Sunday evening, as Douglas Adams once said, we are all faced with the 'Long, Dark Teatime of the Soul' when the TV is rubbish, and you have had 'as many baths as you can usefully endure'.

Fear not, for Lithuania to the rescue! Ehh! says you...Lithuania?

For on Sunday, Lithuanian pagan metallers Obtest hit The Limelight, with Overoth and Brigantia. For a measly eight of yer pounds and fifty of your pennies the long, dark teatime of your soul will be bansished by dark reveries of sonic oblivion...and a few pints are available to purchase too!

Get rockin' for Haiti!

acts No Egos. Do your part


From: Info
Posted by Jonny at 12:56 am No comments: Links to this post

Gettin' better with A Little Bitter

OKAY, time to confess...A Little Bitter are probably one of the favourite local bands we have reviewed and seen. There are many great, great local acts out there, but A Little Bitter seem to have both a charm and intensity that few are able to match.

If you haven't caught them live yet now here's your chance:

Will see you at least at one or more of these dates...we're the ones who know all the words to Jebus, Angel and Battle Cry...
Posted by Jonny at 12:49 am No comments: Links to this post

FOR those of you occassionaly switch yer telly from music and sports channels you can't have helped to be moved by the horrific scenes emerging from Haiti.

On Sunday 31st January there will be a gig - Belfast4Haiti taking place to raise funds for the population of this tiny, deprived nation. 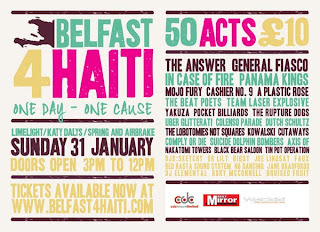 Below are the details from the organisers and the full list of acts....and remember that this is a gig associated with DEC - in other words it's official and the money will help those suffering the dreadful after effects of the earthquake.

Haiti's strongest earthquake in more than two centuries rocked the Caribbean nation on Tuesday 12th January, The Haitian government reported that nearly 70,000 bodies had been recovered by official crews. So far, official estimates have placed the death toll at 200,000, with 250,000 injured and 1.5 million homeless. Experts caution that any final death toll will be a "guesstimate" as the scale of the disaster makes an accurate tally impossible. Many countries have responded to the appeals and launched fund-raising efforts, as well as sending search and rescue teams. The top names in the Northern Ireland music industry are pulling together for a massive one day event on Sunday January 31st with 50 acts including live bands and DJ's. Back in 2005 a similar event was held raising a total of £18,084.64 for the Tsunami appeal. All proceeds will be donated to the Haiti fund. Belfast 4 Haiti will take place in The Limelight, Spring & Airbrake and Katy Dalys on January 31st 2010, tickets are priced £10 and are available in Katy Dalys bar or Ticketmaster.

Doors: 3pm
Posted by Jonny at 12:42 am No comments: Links to this post

Book yer Saturdays - here's the Distortion Project listings for coming weeks. Add these to your metal diary and the gig list elsewhere on the blog

QUICK call to the metal community in Newry. Tara commented on an earlier post about coaches/buses that are travelling up to the big smoke to the Machine Head/Hatebreed/Bleeding Through/All Shall Perish St George's Market metal meltdown on March 1st.

We hear are not aware of any planned buses up from Newry. but if you do let me know by commenting, or if you have a car travelling up with an extra seat email me and I'll pass the details on
Posted by Jonny at 9:01 am No comments: Links to this post

'SO here I am once more, in the playground of the broken hearts; one more experience, one more entry in a diary self-penned...'

When Derek Wilson Dick (a.k.a. Fish) penned those words for Script for a Jester's Tear it was a song that was the emotional heartbeat before the chart success of Kayleigh.  In the same sense the fantastic year that was 2009 is but a prelude, nay a warm up for what is to come. With, but a few short days passed IN 2010, it seems that the coming 12 months are set to be a truly vintage year.

New albums are scheduled from the likes of Airbourne (March 8th), Coheed (April), Stone Sour, Down, Bullet for My Valentine, HIM, Cancer Bats, Avenged Sevenfold [tragic news about The Rev's death; hopefully new platter will be an appropriate swansong], Trivium [feck off the music snobs, they're still a good metal act!], Anthrax [Will Bush be back?...and truly we don't care who has vocal duties as despite those that slabber Anthrax were amongst the best of the 80s...and Bush was even better!] and, and, and, and, and, IRON FECKIN' MAIDEN's latest release is set to hit the stacks towards the end of 2010

Below are the confirmed gigs at the time of going to press [which is fancy way of saying we are too pissed to have more comprehensive listings!].  Any other gigs you know of, let us know!