Updates on the way...

Been a week since I got a chance to update this...and there's plenty to update. Coming soon...review of Fireland's new album and mega gig listings...Ratt and SLF amongst them plus much, much more!
Posted by Jonny at 9:53 am 6 comments: Links to this post

Dragonforce are coming back to town in October - and in a power/battle coup they're bringing Finnish mentalists Turisas to boomtow at the same time.

October 11th will see the acts blast the Mandella Hall. Expect the usual drunken madness of Dragonforce and the mental warpaint battle posing of Turisas - to Holmgard and Beyond etc....

And as a footnote...rumours mount that Motorhead will be coming this way soon in November, with Saxon and Danko Jones in tow. No official word yet though...
Posted by Jonny at 12:43 am 1 comment: Links to this post

Not sure about Linkin Park

The Projekt Revolution tour will now hit Dublin on June 22, at the RDS Arena. Linkin Park will headline, with Queens Of The Stone Age and Coheed And Cambria also on the bill. Not sure about seeing Linkin Park, and would it be worth heading to see truncated sets from QOTSA and Coheed? Discuss :)
Posted by Jonny at 12:27 pm No comments: Links to this post

After the endless speculation Metallica have confirmed their Irish date of the summer. They'll be playing Marlay Park, Dublin on August 20th, with Tenacious D the first announced support act...tickets go on sale on 18th April.
Posted by Jonny at 11:42 pm No comments: Links to this post

Korn singer Jonathan Davis has decided to shorten the European leg of his "Alone I Play Tour" due to "un-expected family commitments".

Belfast's June date has been cancelled as a result.

He has, however, pledged to come back "soon".

"I'm glad we are still going to bring the show to Europe", Jonathan said, "we had a lot of European fans asking us about the tour since last fall so we are excited for a chance to play.

"We look forward to coming back soon to do alonger run of dates overseas."

Tickets are refundable from point of purchase
Posted by Jonny at 12:33 pm 2 comments: Links to this post 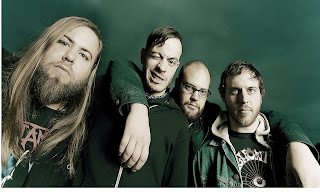 Canada's Cancer Bats come to roost at the Spring & Airbrake on Saturday, May 24th in a CDC Leisure/Distortion Project collaboration that will shake the rafters of the venerable venue.

And now the official band blurb...

"The Cancer Bats have come to destroy. Fueled by a burning desire to rage harder, play louder and have more fun than any other band, Cancer Bats mix hardcore, southern metal, and punk rock into a lethal rock and roll explosion.
"‘Hail Destroyer’ is the Cancer Bats second 'proper' studio release. Co-produced by Eric Ratz (Big Sugar, Theory Of A Dead Man, Billy Talent), Kenny Loung (Billy Talent), and Greg Below (Alexisonfire) and recorded at Vespa Studios, the album features an edgier, much heavier, and finely tuned collection of songs.

"From the punchy opening riff of the title track “Hail Destroyer” right to the melodic outro of “Zed’s Dead, Baby,” the Cancer Bats do not disappoint.

"Integrating more Punk, Stoner Rock, Metal, and Hardcore into the mix and taking a much more introspective approach than its predecessor, ‘Hail Destroyer’ sees the Cancer Bats taking their musicianship to a whole new level. Lead singer Liam Cormier’s heated vocals and heavily personal lyrics keep the energy high throughout the album, while axe-wielding Scott Middleton’s electrifying solos and shredding riffs make you want to rock out like never before. Throw in Mike Peter’s rhythmic ferocity and you have an album that will leave you salivating for more. Featuring guest vocals by Cancer Bat bro’s Ben Kowalewicz (Billy Talent), Wade MacNeil (Alexisonfire), and Tim McIlrath, ‘Hail Destroyer’ will be in stores and online April 21 2008.
"The band originated in May of 2004 with singer Liam Cormier and guitarist Scott Middleton, former member of Toronto metal band At The Mercy Of Inspiration. The two wanted to form a project that combined their favorite parts of bands like Refused, Black Flag, Led Zeppelin and Down, among others. The line-up was rounded out with the addition of Andrew McCracken on bass and Mike Peters on drums.

"The four-piece wasted no time writing and recording songs for a self-released demo that saw light in January of 2005 (later reissued on Oct 31 2005 on vinyl by Tragicomedy Records). Determined to spread the gospel of rage and get its music heard, the Cancer Bats spent the next year touring extensively all over North America with bands such as Every Time I Die, Nora, Alexisonfire, Comeback Kid, A Life Once Lost, The Bled, and Misery Signals. Show after show, from coast to coast, the Cancer Bats, whose explosive live shows inspire floor punching, windmills, and arm spinning, had begun to establish their own devoted legion of fans.

"With the hellacious buzz about the Cancer Bats fuelling across North America, the band unleashed its highly anticipated debut album ‘Birthing the Giant’ on the most evil day in history 06/06/06. Produced by award winning Canadian producer Gavin Brown (Three Days Grace, Billy Talent) the album featured bold, infectious riffage that peaked the interest of audiences and press across the globe.

"With critical acclaim resonating from all sides of the planet, the year following the debut release saw the Cancer Bats fly to the top of the Hardcore Punk scene. From signing licensing deals with Hassle in the UK and Shock in Australia, to winning the Favourite Hardcore/Metal Group of the year at the 2007 Indie Awards and Best Independent Video at the 2007 MuchMusic Video Awards, the world had started to take notice of Canada’s favourite flying mammals."

Enough said from the blurb, we'll simply sum it all up by saying "We like 'em"
Posted by Jonny at 11:33 pm No comments: Links to this post

For the past decade or more hard rock and heavy metal acts have been pouring out of Scandanavia like a guitar laden plague. Some have achieved worldwide acclaim, and some have carved out a niche in the underground. This is far removed from the days when the only rock stories from the lands of winter's permanent night were black metal murders and church burnings.

While the Scandanavian Black Metal scene still exerts a healthy influence on diverse acts, there has been a revival from these Viking lands of what some disparagingly call 'mainstream'. And, it was one of the leading exponents of Finnish mainstream metal, Nightwish who touched down in Belfast's Mandella Hall on Wednesday.

Thus was the challenge faced by Swedish act Pain...opening to a partisan headliner crowd Pain have more than a hint of other acts from the lands to the north. Energetic and with melody playing a key part in songs that could have been lost in the low end, they at times came across like a 'lite' version of Children of Bodom.

Their energy and willingness to try to engage the audience eventually paid off, though in terms of pacing the set they could learn from other Scandanvians. While Turisas have made Rasputin a rambunctious set closer, Pain's excellent cover of The Beatles' Eleanor Rigby was lost in the middle of their set.

Nightwish have no such problems in terms of pacing their set. Seasoned in arenas across Europe, the Finnish act know when to turn on the power, allow the crowd a breather, and mix the new with the old.

However, their very existence was called into question less than two years ago after their very public and acrimonious dismissal of Tarja Turunen. In May of last year Anette Olzen was announced as a replacement. Fans who worried that Anette could fill Tarja's shoes need not have worried.

Kicking off with the stomp of Bye Bye Beautiful Anette proved a worthy foil for the complex melodies and power of Tuomas Holopainen's wrting. Mixed with Marco Hietala's vocals any doubts over Anette's ability to match Tarja's range paled into insignificance.

Instead she brings a different dynamic to Nightwish, which whilst retaining the symphonic elements of the past, comes to the fore live.

Tracks off latest release Dark Passion Play are given a fire and energy live. And, Anette's treatment of older tracks such as Nemo and Wishmaster showed she can adapt her performance when necessary.

The smattering of older tracks were almost overwhelmed by the new material. Amaranth and Sahara stood out, with the Stephen King tribute track 7 Days of the Wolves raising the bar yet further.

But what stands out with Nightwish is their ambition. Tuomas - as founder, chief songwriter, and band leader - is not afraid to tackle live lengthy epics. Album opener The Poet and the Pendulum was unveiled in all of its 13 minute plus glory. Even such an ambitious live performance was pulled off with aplomb as far as the crowd was concerned.

The only niggles of the night were the occassional over-reliance on samples and Anette's absence from the stage during longer instrumental pieces.

However, for a band who play stadiums in Europe the fact that they are prepared to play, what for them, are smaller venues such as the Mandella Hall is worthy of praise, and a tribute to promoter Wonderland that they were able to snatch such an act.

The stadium work of Nightwish paid off for the Belfast punters, who saw an international act lay down a mighty, ambitious soundscape in a relatively intimate venue. There were few that walked out on to University Road without a smile on their faces.
Pic courtesy of Nadia - Junior Editor, Belfastmetalheadsreunited
Posted by Jonny at 11:34 pm 6 comments: Links to this post

It's official, Scott Weiland has left Velvet Revolver. Whether it's because of internal tensions with his recent alleged need for more rehab, or to rejoin Stone Temple Pilots. Slash has said that the band will continue no matter what, during a recent interview. So, any takers for vocalist for VR. I hear Axl is at a loose end...
Posted by Jonny at 9:29 am No comments: Links to this post