One of the many fine photos from Dragonforce's Belfast gig - courtesy of Rokpix's Colin Patterson - to find out how you can order pix from this and the many other concerts Colin has snapped at email. Take careful note that as Freddie headbangs away Sam is sipping yet more beer! Respect! 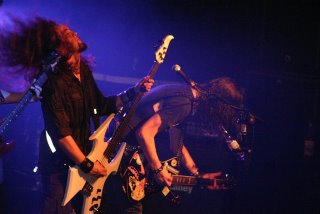 Email ThisBlogThis!Share to TwitterShare to FacebookShare to Pinterest
One of the many fine photos from Dragonforce's Belfast gig - courtesy of Rokpix's Colin Patterson - to find out how you can order pix from this and the many other concerts Colin has snapped at email. 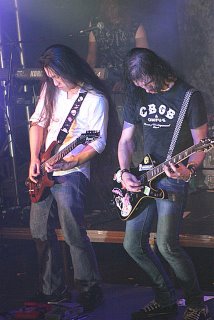 BLACKIE Lawless is as old as yer da! Thus quoted one sage mind in Belfast on Sunday night.

True he is pushing on a bit, but he’s still able to rock it out!

WASP in the Spring and Airbrake was always going to be a wee but weird for us parents in the audience (even if Baal and I aren’t quite as old as Mr Lawless). After all those of us of a ‘certain age’ remember WASP ripping the Ulster Hall apart in the 80s.

But that said they are still a confident and competent live act, replete with every non-pc song lyric, except one, more of which later.

Arriving on stage astride an outrageous mic stand with On Your Knees, the band ripped through a set that apart from two tracks from Crimson Idol, was almost entirely drawn from early platters, when they were in their Chris Holmes heyday.

Hedonistic tracks aplenty were trotted out Wild Child, L.O.V.E Machine, along with Neutron Bomber and Headless Children. Piper’s solo on Crimson Idol was excellent, though it may have been in the set to give Lawless a break, given his advancing years.

And therein may be the problem. The voice is as strong as ever, but his engagement with the crowd apart from the odd shout out was lacking. The old bugger never broke a smile once.

Encore time saw the obligatory Blind in Texas chant along, but even Lawless must have noticed the crowd flagging. It was time to trot out Animal (Fuck Like A Beast) to send the sell-out crowd home grinning. Instead house lights up and good night, after less than 75 minutes.

WASP are still an excellent band, and while you can’t help loving it when they are on stage there is a hint that this is a pension tour for Lawless, not helped by the fact that no new, or even more recent material was on show.

Word for support acts – Sinnocence continue to deliver a solid set, building up their live talent, and as evidenced by the early crowd reaction getting together a solid fanbase.

Less can be said for Jaded, the all-girl act from the US. Metal by numbers, clichés aplenty (and not even the funny ones) and some God-awful lyrics (what was that about a jet car…c’mon love that lyric sounded like something Hawkwind would write when they can’t find any acid). If Jaded want to get anywhere, a radical re-think is needed and a pay rise for the guitarist who was the only bright spot.
Posted by Jonny at 10:55 am 1 comment:

FIRELAND had the unenviable task of opening for Dragonforce on a few dates on the current tour.

While it’s never easy opening for a band which has a growing and almost cult following, the Belfast act rose to the challenge.

Within three songs they’d won over a large proportion of the crowd, and continued to become more comfortable on stage.

Suffice to say that those who managed to arrive half-way through the set had fists pumping and horns in the air.

Servants of the Dark and I Am Invisible were stand outs, benefiting more in the live environment.

The bands stagecraft is at times a little rigid – there needs to be more than the singer engaging the crowd – but riffs and strong solos are holding things together for now.

At times there sound strayed a little too close to metal cliché, but that can be ironed out through more road work and perhaps some refinements to the arrangements.

Overall Fireland are proving to be potential contenders on the more traditional metal scene.
Posted by Jonny at 10:54 am No comments:

Lack of flames but great set...

DRAGONFORCE are undoubtedly one of the hottest prospects on the current metal scene, they even make a dozen or so references to flames, fire and all sorts of conflagrations throughout their track listings.

And as if to take the analogy even further they had local support act Fireland as part of the current tour!

So why then no pyrotechnics or flamethrowers when Dragonforce come on or leave stage? I know the Mandella Hall isn’t the biggest venue in the world, but a couple of flash pots….

But when the ‘force touched down on stage for the November Belfast dates there was incendiary playing (that’s enough about flames! – Editor) and energy emanating from the stage to keep the fans happy.

Of course all the favourites were trotted out (with the exception of …Lifetime on Thursday night), and of course the between song banter was as clichéd and funny as ever, but this is well into a year of touring the Inhuman Rampage album.

It took about halfway through the set for the band to warm-up to their full live potential, seemingly when Sam and Herman’s beer intake had reached a certain level.

At times ZP seemed at a loss what to do when the harmony solos were widdling away at stage front, though as the set wore on this was less evident as he took to engaging with the front rows more and more.

The emerging star of the band is now Frederic, the French bassist, who was a slightly peripheral figure when they played Belfast earlier this year. We here at Belfast Metalheads Reunited have been searching in vain for the exact translation for it, but unable to find it, suffice to say he had a ‘Merde munching grin’ on his bake!

As usual everyone cheered when Vladim did his keyboard solo, but it was almost identical in every note to last time, including The Simpsons theme tune flourish. It is the one aspect of Dragonforce’s live set that has a nasty niff of naff Euro-metal.

Vladim needs to re-evaluate his sound before the next album – we humbly suggest a crash course in John Lord, Colin Towns and Darren Wharton vibes!

The ‘Force set was rounded off with Through the Fire and the Flames (more bloody fire references) and, after the obligatory pause, a return for Valley.

Hilarity ensued as Sam tried to remain standing, and failed miserably to show off his bass prowess when swapping axes with Frederic, while the band rounded off a fine show.

However, there were a few gripes (apart from Vladim’s solo and lack of pyros). The set, and some of the banter, is too familiar now. It’s a sign of being on the road for a year, and a sign that they need to get back to the studio now.

Also, what was the point of bringing the trampolines out for 30 seconds? Just to say ‘We had trampolines?’ Might work in bigger venues, but not here.

The final gripe was the asshole with attitude, bad hair and worse clothes. It’s a metal show dude, people bump into each other, don’t get pissed at people about it, and if you want to fight at a concert, go to a spide gig or a skinhead get together, but come back to a metal gig with that attitude again and your ass will be kicked. There were a lot of people looking for you at WASP to say, ah hem, ‘hello!’

Apart from those minor gripes – great show and hurry back Dragonforce with new material and a refreshed set.
Posted by Jonny at 10:48 am No comments: