NEWS: Tesla ready to Shock with their eigth studio album to be released in March

They stole Belfast's hearts when they opened for Def Leppard for two night's in the Ulster Hall and since then the affection for Tesla in these necks of the woods remains strong.

Hence there will be general rejoicing that the band are finally releasing a new album (and with Phil Collen of the Lepps co-writing and producing).

Below is the full press release and links for pre-order. 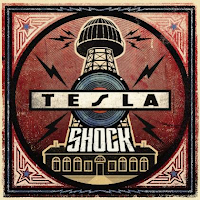 Produced and co-written by Phil Collen (Def Leppard), SHOCKis TESLA’s eighth studio album. TESLA is actively touring across North America, Europe, and elsewhere around the globe throughout 2019, including a performance at Download Festival.

One of the world’s most celebrated and enduring rock bands with a diehard, loyal fanbase, TESLA has enjoyed international chart, radio, and tour success for nearly 35 years, with global album sales topping 15 million.

That they are still roaring and soaring should be no surprise. That’s just how they are built. TESLA may have been born in the mid ‘80s eruption of leather, spandex and big hair, but this band has never been about those things. Their bluesy, soulful sound is strongly embedded in the roots of organic, authentic 1970s rock and roll. The same roots that produced bands like the Allman Brothers, Grand Funk Railroad, AC/DC, Lynyrd Skynyrd and Aerosmith.

TESLA’s legacy is alive and well as they continue to record and sellout venues all over the world. As worn in and comfortable as your favorite pair of jeans, as tough and dependable as your coolest leather jacket, TESLA endures because they are a celebration of the greatest spirits of rock and roll.

TESLA is always ready to rock, and they invite everyone to join them with SHOCK. 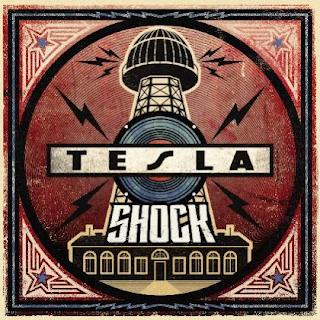 Posted by Jonny at 2:17 pm No comments: Links to this post

RINGING in 2019 Bloodstock has announced Powerwolf, Soulfly, Incite and Swallow The Sun as the latest addition to another burgeoning August festival line-up.

For full details below is the full official announcement...keep going like this they're going to need a bigger poster!

"If you’ve dropped all your money on Christmas and are counting the pennies, the popular ticket payment plan is also now open, breaking that weekend ticket cost into five much more manageable chunks.  First things first though, four more join the fray....

"POWERWOLF land the coveted main stage special guest slot on Friday.  The band tell us "We're looking forward to returning to the mighty BLOODSTOCK Festival after almost ten years to celebrate the metal mass with our friends in the UK - this is going to be a truly wild one!!"  The German power metallers released their seventh studio album, ‘The Sacrament of Sin’ in July of last year, from which spawned the vampire-themed video for ‘Killers With The Cross’; https://youtu.be/cXOAcuNhFS4.

"SOULFLY also step into a Ronnie James Dio main stage spot on Friday.  Frontman Max Cavalera is looking forward to playing at Catton Park, telling us “BLOODSTOCK 2019, get ready!  It will be a Cavalera invasion!  SOULFLY will be playing a lot of songs off our new album, ‘Ritual’.  My son, Richie, is coming with INCITE too and together we will make a day to remember!  Fuck yeah!  Let the Ritual begin!”  SOULFLY released their eleventh studio album, ‘Ritual’ via Nuclear Blast earlier this year.  Check out the groove laden title track here; https://youtu.be/z2LHZs7xx-w.

"As Max Cavalera pre-empted, Phoenix metal squad, INCITE come to Catton Park for the first time, picking up Friday’s hotly-contested main stage opening spot!  With their fifth studio album, ‘Built To Destroy’ landing in stores on 25th Jan via MinusHEAD Records, there’s plenty of catalogue to check out if you’ve not listened to the band before.  Maybe start by watching the video to the new album’s title track here; https://youtu.be/CCoGid3u-wc.

"Finnish prog doomsters, SWALLOW THE SUN grab themselves an early main stage spot on Saturday.  Introduce yourself to their sound with ‘Rooms And Shadows’ - https://youtu.be/0_veG-Hv4I8 - taken from their 2015 album, 'Songs From The North I, II & II'.  The band also released the atmospheric and ethereal ‘Lumina Aurea’ EP on the Winter Solstice in December via Century Media.

"BLOODSTOCK’s very popular ticket payment plan is available now, where you can spread the cost of your standard weekend ticket over 5 affordable instalments!  Your first payment of just £36 (initial instalment of £29, plus £7 booking fee) is due at sign up - which you can do at any time until 28th Feb - then four further instalments of £29 will debit your bank account on 3rd April, 1st May, 3rd June, and 2nd July respectively.  Please note, VIP tickets are not available on the deposit scheme.

"The final allocation of VIP tickets, plus Podpads, Luxpads, Bellepads and Octopads are now on sale, plus a limited number of VIP upgrades (for those who’ve already purchased a standard ticket).  For full details click to http://www.bloodstock.uk.com/pages/vip-camping. Standard weekend tickets are also in the ticket store, priced £145 (+ fees), snap yours up at http://bloodstock.seetickets.com.

"BLOODSTOCK will take place at Catton Park, Derbyshire on 8th-11th August 2019.  Get additional information over at www.bloodstock.uk.com." 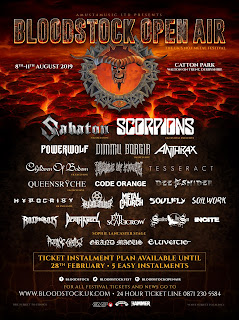 Posted by Jonny at 2:29 pm No comments: Links to this post