FOUR more bands have been added to the Bloodstock 2019 line-up.

Below is the official statement...

Uncompromising hardcore punk squad CODE ORANGE make their BLOODSTOCK debut on Saturday on the Ronnie James Dio main stage. The band's Jami Morgan tells us “We’ve been wanting to play Bloodstock for years and are excited to bring the hurt back to the UK!”  The creative nonconformists recently dropped a surprise EP, ‘The Hurt Will Go On’, following a UK tour with BLOODSTOCK alumni, Trivium. Expect the unexpected, but meanwhile have a listen to ‘The Hunt’, featuring Slipknot’s Corey Taylor, at https://youtu.be/qgs5JzUQpy4 or Grammy-nominated album title track ‘Forever’ at https://youtu.be/dZ9JVxQVQy4.

At Halloween, the appropriately named SKELETONWITCH join the Saturday bill on the main stage. Having released their sixth studio album, ‘Devouring Radiant Light’ back in July, the Ohio-based band have just been on the road opening for System of A Down in the US. Check out ‘Fen of Shadows’ here - https://youtu.be/cZdeKg109ig and if that piques your interest, stream the whole album over at http://smarturl.it/SkeletonwitchDRL.

ROTTING CHRIST headline the Sophie Lancaster stage on opening night, Thursday. Greece’s blackened death metal overlords are working on the follow-up to 2016’s ‘Rituals’ album set for release via Season Of Mist this winter. Mainman Sakis tells us “Metal brothers and sisters! We can proudly announce that we are returning to one of the best, most dedicated festivals around for our precious scene. We look forward to seeing you all with a brand new setlist on Thursday night, headlining the Sophie Lancaster Stage at BLOODSTOCK! Until then...Keep the spirit alive!” In the meantime, check out the previously unreleased ‘I Will Not Serve’ taken from ‘Their Greatest Spells’ best of collection that landed earlier this year - https://youtu.be/ou285ecpuTY.

ELUVEITIE also make a return to BLOODSTOCK, stepping into a Sophie stage headline slot on Sunday. Last seen at Catton Park back in 2008, the Swiss folk metallers are currently preparing to share a special 10th anniversary edition of their classic second album ‘Slania’ on 16th November via Nuclear Blast. For a taste of what’s in store next August, listen to more recent track ‘Rebirth’ here; https://youtu.be/d-pSq4MJmy8.

BLOODSTOCK’s Rock Society memberships also go on sale at 9am tomorrow, Wednesday 31st October. The Rock Society is effectively the festival’s ‘Members Club’, offering not only a 10% discount on your weekend ticket (on top of the early bird discount when you purchase the 'Rock Society membership + ticket bundle' option), but all sorts of other cool benefits like priority signing tent access, access to the VIP Serpents Lair bar, special tours of the backstage & production areas seeing ‘behind the scenes’, a Rock Society laminate, a dedicated hangout area in the Rock Society tent on site and plenty more besides. Full details can be found at http://www.bloodstock.uk.com/pages/rock-society. Memberships are limited to just 300 and sell out almost immediately. Priced at £75, these memberships are available on a ‘first come, first served’ basis so be ready in the ticket store at 9am on Halloween if you want to join the club!

For a bit of skele-fun on Halloween, head over to BLOODSTOCK’s Facebook at https://www.facebook.com/bloodstock/ for a fangtastic one day only competition to win a Hell-ishly good prize.

Standard weekend tickets are also currently available at ‘early bird’ prices (just £132 for four days of metal fun), so pick up yours at the ticket store - http://bloodstock.seetickets.com - if you want to save a few quid. Camper van passes are also available in limited quantities, but be quick, as limited spaces remain.

For those who want their VIP spot guaranteed, BLOODSTOCK’s first wave of 2019 Serpents Lair VIP tickets are also available, priced at £290. A second wave, including the Deluxe VIP packages (Luxpads, Bellepads, Podpads, etc) and a limited amount of VIP upgrades (for those who’ve already purchased standard weekend tickets) will then become available on 16th December at 9am. For full details click to http://www.bloodstock.uk.com/pages/vip-camping.

BLOODSTOCK will take place at Catton Park, Derbyshire on 8th-11th August 2019. Get additional information over at www.bloodstock.uk.com. 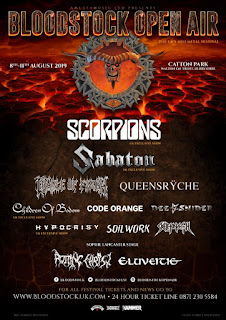 ALBUM REVIEW: Cathartic melancholia from The Crawling on Wolves And The Hideous White

SOMETIMES an album comes along that is almost completely flawless -something that transforms what your understanding of what metal is; something that takes the clichéd genre sub-divisions and tips a heap of sonic abuse atop of the conventions.

To say such statements about any band would appear biased - but to say such things about a Northern Ireland metal act given the nature of this site would appear to be the most brown-nosed attitude of a reviewer. 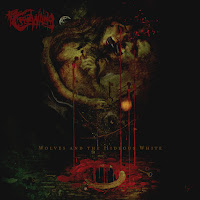 But The Crawling's second album, 'Wolves And The Hideous White' is remarkable in the best sense of the word. Forget the labels 'doom' or 'death', this is pure metal, performed with a sense of bravura and seeping with bathos.

Yes, the sometimes hilarious YouTube series from Andy Clarke on the agonies of putting the recordings together give an insight into what bands go through but in the end The Crawling have put together six tracks that will have listeners contemplating the human condition...and wondering at what we are here in this fucked up 2018.

To be sure many walk these sonic echo chambers, but The Crawling give voice through exploration, yet the pain and agony of humanity is on Wolves and the Hideous White a cathartic journey.

We all feel disconnected in this connected world - but to hear that reflected by this three-piece is a validation that our loneliness and despair that we may feel and by the same token a mirror that allows us to be ourselves.

To make an extremely bold statement (I await the Twitter backlash) The Crawling have taken the torch held aloft by Geezer Butler and doused it in the flickering despair of a post-agreement fucked up Northern Ireland. 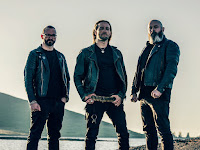 Yet the themes explored are universal, such as on the insistent 'Rancid Harmony', which has anyone with the least self-awareness being forced to look within.

What makes this lyrically an outstanding release is that the sonic assault mirrors it to such an extent  that even if one were to ignore the words one would be forced to contemplate your own position in a universe that seems to push us by, ignoring our pleas and prayers. But that is what makes this special.

To hear and feel what we keep hidden in our darkest moments; the times when we stare in the darkness at the ceiling and wonder why we exist, is revelatory. We are not alone in these thought and fears. That  we ae not alone is a service The Crawling provide.

Such deep sentiments about the human condition and the desire - no, more than desire, the need, to feel part of this fucked up human state is to sense we are not alone.

But by the same token the music Andy, Stuart and Gary have loosed upon the world is achingly beautiful. 'Drowned in Shallow Water' is perhaps a song that even after several listens - and a few more - moves one to tears.

True, there are but six songs on Wolves And The Hideous White, but they will rent your heart and help you explore your soul. If 'Anatomy Of Loss' set the landscape this album forces you to walk the path of  broken paving and shattered glass. It is truly 'A Time for Broken Things'.

We want to belong, we want to be part of something - even if we cannot know what that exactly is - and we need to hold each other's spirit's together.

On this album The Crawling have done just that. True, they could have done without the tolling bell intro on 'Still No Sun' but that is just a petty jibe as we try to find some point to make...

To put it bluntly, this is an album you need in your life: Yes, it is musically impeccable (apart from yon bell!), and yes it taps into our deepest fears, but by dong so it is a chance for catharsis from the doomed melodies within. It is a chance to embrace the arrangements, to wallow in the emotions, to celebrate the fact that when metal is this good the dark themes explored are the most life-affirming sounds on this fucked up planet.

Wolves and The Hideous White is available now for per-order
The official launch is on November 15th at Belfast's Empire, with Conjuring Fate, Neamhni and Disconnect providing support and is part of Belfast Music Week 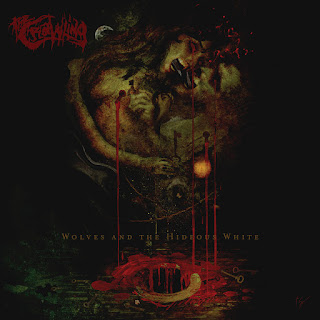 Email ThisBlogThis!Share to TwitterShare to FacebookShare to Pinterest
Labels: The Crawling, Wolves And the Hideous White. Grindscene Records.

Earlier this year, Geoff and his band undertook an extensive tour of the UK including a packed out show at The Empire to celebrate the 30th anniversary of the classic Queensryche album ‘Operation Mindcrime’, with several dates completely sold out.

After leaving Queensrÿche in 2012, Geoff started a project called ‘Operation: Mindcrime, named for his critically acclaimed concept album, and re-invented himself with his Operation Mindcrime band mates, going on to produce three inter-connected albums, ‘The Key’ in 2015 followed by ‘Resurrection’ in 2016 and the final piece of the puzzle, ‘The New Reality’, being released in 2017.

All three albums are part of a concept album trilogy involving virtual currencies, internet banking and stock trading, which were met with largely positive reviews - as they say capturing the zeitgeist. 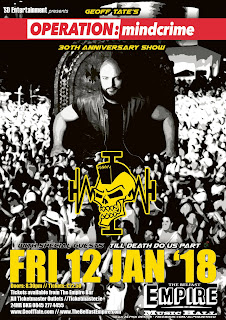