Originally formed in 2002 as a Helloween tribute band they are now a valid band in their own right.


Concept albums can be a tricky vehicle and if based on an original idea by the band can allow the listener to follow the journey through the album but if based on a piece of existing literature it can be hard to follow if you haven’t read the book, especially if there are as many characters as there are in Watership Down.


That aside and side stepping the fact that a Metal band are writing songs about pesky Wabbits  is “Rabbits’Hill pt.two” any good?


With a blend of melodic heavy metal, more standard metal and a dollop of acoustical numbers, musically this album ticks most of the boxes. Huge orchestrations and epic choirs are prevalent throughout and lead bellower Alessandro Conti shows off his powerful and impressive range, more than reminiscent of Michael Kiske. 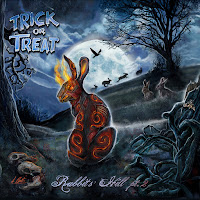 ath)’ is a decent power metal song full of great riffs and double kick drums with a bit of Death metal growling thrown in for good measure!


The mood changes to a folksy sound on ‘Together Again’, a song about strength survival and freedom featuring a slightly demure vocal from Conti.


‘Efrafa’ has a haunting opening with tolling bells but soon develops into another power metal tune with some solid riffs and background vocals. It is melodic in structure and has some nice key changes and technical guitar parts.


The now ‘traditional’ power ballad ‘Never Say Goodbye’ is up next and features Sara Squadrani (Ancient Bard and Aryeon) on shared vocals. Her somewhat nasal quality blends nicely with Conti to deliver a very powerful song.


It’s back to power metal, fast paced riffage with ‘The Great Escape’, a song not about Steve McQueen but rabbits doing a runner! It’s another fine tune with a great vocal delivery from Conti again and a strangled guitar solo that works really well.


“They Must Die” is the darkest song in nature on the album and has an opening slow, heavy riff reflecting the evil within the song. With guest vocals from Tim “Ripper” Owens as the ‘evil’ rabbit General Woundwart the song increases in pace into another fast paced metal tune with “Ripper” a decent, in character, vocal.


“Beware The Train” is an instrumental on which the band delves into their inner Dream Theater in places. It starts with a fairly standard metal riff before the power metal side takes over.


There is another folksy start to ‘United’ featuring Tony Kakko (Sonata Arctica) on vocals before the riffs kick in. More traditional in structure with some staccato guitar work it develops into a song with an almost prog rock feel to it by the end.


Penultimate song ‘The Showdown’ is 11 minutes long and starts with a huge Orchestrational arrangement. The song varies between fast paced old skool metal riffage and mid tempo ones with some fine soloing from Guido Benedetti and Luca Venturelli. There is also a mellow Pink Floydish middle section and the song ends with a narration by Conti over an acoustic outro.


The album finishes with melodic hard rock tune ‘Last Breath’ which brings the album nicely to a close.


Overall this is a decent power metal album worth a listen with possibly the synopsis for Watership Down at your side.


Review by Andy Gillen
Posted by Jonny at 9:28 pm

Email ThisBlogThis!Share to TwitterShare to FacebookShare to Pinterest
Labels: Trick or Treat