And, there are no better proponents of that 1980s pure rock sound than Maverick. And, goddamit, but they have exceeded, surpassed and gone way beyond their début outing, 'Quid Pro Quo' on their new platter 'Big Red'.

Why the radio stations across the globe aren't beating these guys doors down and major labels throwing cheques and deals at them is a mystery.

But that's not to say they are without suitors, after signing with German label Metalapolis Records. And boy that label must be dancing around their offices having Maverick on their roster. 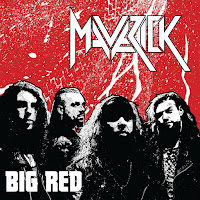 Let's be very, very clear, this isn't just a good release. This is a great release - more hooks than a salmon poacher on ampehtamines, more licks than Gene Simmons in the Playboy Mansion and more of just about everything that made the 80s such fun.

However, let's be clear that Maverick aren't just about re-treading the past, revelling in the glories of their heroes. They have produced a contemporary, polished album that has depth to the music as well as lyrical class. Sure, there are love songs, songs about love lost and angst, but there are also tunes that explore darker territory ('Beyond The Gates').

What the band have done on 'Big Red' is - and you'll excuse the oxymoron - a nuanced, thoughtful version of what class hard rock can do in the right hands. That's not to say they don't know how to write 'catchy'

When they released 'Quid Pro Quo' in our review we said the track 'Got It Bad' was catchier than ebola, but on Big Red they have upped the stakes with 'Forever. The riff will have you humming and by the time you listen to it in full you'll be a like a crystal meth addict wanting more and more fixes 'Forever'.

David Balfour's vocals are as a strong as ever, and no doubt their tour with The Poodles across Europe has paid off. And, speaking of The Poodles, their vocalist Jakob Samuelsson, guests on 'Asylum'. Oh, and no less than ex-Alice Cooper six-stringer Kane Roberts pops up with some solo excellence.

In an era when the pale shadows of the 1980s have scrubbed off their make-up and hope to earn a crust with the name and playing their past hits, Maverick are fresh; almost a more febrile interpretation of their idols - and whisper it quietly, exceeding some of them.

They are a band that perform live as a unit, and while 'Quid Pro Quo' showcased a large part of that, this time out the recording really captures that unitary feel, a band tight as possible, in song writing and recording.

Ryan's lead work has reached a new level, more balanced as well as showing off his obvious skills, while Richie and Mike are rock steady as a rhythm unit with enough flourishes to keep listeners' attention. There's even a brief bass solo from Richie!

There are no weak tracks on this. 'In The Night' is compelling, while 'Whiskey Lover' is perfectly set up as a live track that will have everyone joining in a great chorus. The opening of 'The One' should have the satellite stations across the US very excited when this is added to their play lists.

The addition of the multi-talented Terry McHugh to the line-up on guitar will add further to the live interpretation of these songs.

To be honest when going into review/listen this album we had a certain sense of trepidation. Had Maverick reached their high water mark with 'Quid Pro Quo' and like many a band from Northern Ireland done one big tour and that would be it?

Well, not only have they exceeded the last release, they have reached further, extended themselves and put them in the position to go beyond even their own expectations.

The tender closer 'Fly Away' is the perfect example of a song that can transcend both the rock listener and any fan of a well-crafted tune; a delicate ballad that is some god-forsaken boy band recorded it Radio One would go into collective meltdown.

Re-reading what the opinions above might seem like hyperbole until you listen to 'Big Red'. Even our death metal correspondent was humming along and for the first time in months grinning...

'Big Red' is the next step for Maverick, and we can't wait to see how high they will climb on the ladder.

Review by Jonny
Posted by Jonny at 4:23 pm