THRASH metal can sometimes be cliché upon cliché, but when it is done right there can be real depth, and the bands that do it right are not constrained by strictures or boundaries.

Such is the case on Dust Bolt's latest release, 'Mass Confusion'; a masterful example of a band growing and evolving. Just take the hauntingly great track 'Exit' or the speedy thrash of 'Turned to Grey' to show the contrast and evolution of the German four-piece. 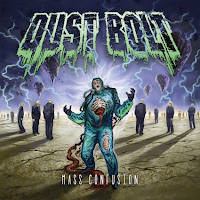 ments on this, their third album outing.

Many bands who pay homage to the Bay Area sound tend to get stuck in the groove of their predecessors without putting their own stamp on it. On this, Dust Bolt, have taken the sound of the past, added their own twist and produced an album that engages on each subsequent listen.

Lenny's vocals and his intertwining work with fellow axeman Flo are a masterclass in how to perform in the studio without sacrificing intensity.

Opener, 'Sick X Brain' is a one minute blast of fury that sounds like Suicidal Tendencies on steroids mating with early Exodus.

The sheer pace of the track might showcase the work of bassist Bene and drummer Nico, but their rhythmic sensibilities aren't confined to blasting out thrash tropes. There is sufficient variety to keep listeners interested.

That's not to say that Dust Bolt indulge in typical themes, but tackle international political themes and reflect their rage at the state of the planet throughout.

Mass Confusion is not only an album for thrash fans, but for all fans of metal who need a little more variety in their music life.