NEWS: Those Damn Crows on the recording and release path

JULY 25th sees the re-issue of Those Damn Crows single ‘Fear of the Broken’.

Originally released in 2015 via an exclusive launch on Kerrang.com, things then went quiet in the TDC camp as, a handful of live appearances aside, the up and coming Welsh band became firmly entrenched in putting together their debut album, ‘Murder and the Motive’ (due September 26th).


With the album finished and UK dates coming in thick and fast, Those Damn Crows are back!


‘Fear of the Broken’ (coupled with the equally anthemic ‘Don’t Give a Damn’) is the perfect re-introduction to the Welsh rockers.

The five piece have been steadily building quite a reputation on the live circuit, with acclaimed appearances at Camden Rocks, HRH 2015 amongst others…  which led to the band inking a deal with Paul Ryan at UTA agency. 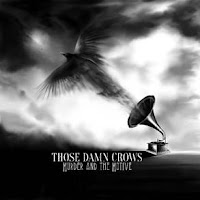 The band finished their debut album, the anthem packed, ‘Murder and the Motive’ earlier this year and will be releasing it September 26th.


The album features the aforementioned ‘Fear of the Broken’, plus the hook laden gems such as ‘7 Days’, ‘Someone Someday’ and the unforgettable ‘Blink of an Eye’. All driven by a tight and focussed band led by the exceptional voice of Shane Greenhall.


Prior to the album release T/D/C will release a new mix of ‘Fear of The Broken’ and will follow that up with selected live dates across the country.
Posted by Jonny at 2:44 pm