From having thousands doing the 'Crabulon' to hilarious videos they are something special - probably special needs.

Some 'diss' them for being a parody on metal, sneer at their, well frankly, ridiculous stage outfits, but don't give a flying fiddler's fuck about that. They are brilliant in our eyes. Watch the new video at the end of this post 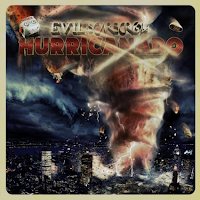 Ahead of their upcoming Bloodstock slot they have released a new single and video...and the single is free...


Working in conjunction with Bloodstock Open Air Festival, the lovely people at Evil Scarecrow are giving their new single 'Hurricanado' away free on the Bloodstock Festival website, all you have to do is sign up to either of these links for the track: http://www.bloodstock.uk.com/pages/subscribe-form or:http://eepurl.com/b9mfEr
'Hurricanado' will also be available to buy from all the usual outlets - iTunes, Amazon, Google Play etc now.

The fantastic new video for 'Hurricanado' is out now & Dr Hell had a few words about the herculean feat it took to make:


“The final sequence was recorded in a single take, all we have done is sped up and slowed down some of the footage. It was a huge choreographed effort and we had amazing team of people that were literally in the shadows moving props in and out and throwing space hoppers and tricycles at us. It took weeks of planning and scripting and the whole sequence took about 16 minutes to run through each time. We’ll be releasing some time lapse footage of the chaos down the line"


This year Evil Scarecrow are returning to the Main Stage at Bloodstock on Friday, they’ve also got a brand new single which they will perform live for the very first time during their set and have partnered with Bloodstock to bring it to you as soon as it’s released. Dr Hell has this to say:


“We really wanted to do something special for Bloodstock this year so we’ve fast tracked some music genius (*coughs*) from our upcoming album especially for the BOA fans, which will be available for free through the Bloodstock website! So, it should give you time to learn all of the ropey latin chanting that we crowbarred in-between some thunderstorm samples. Writing music is easy. It’s another massive Scarecrow hit and we expect to see you all spinning on the spot for ‘Hurricanado’. Bloodstock will be the first time we have ever played the song live, so the dizzier you are the less obvious our mistakes will be."