ALBUM REVIEW: Do Blackfoot deliver on their ‘Southern Native’ status with latest line-up

BLOACKFOOT is a band from the 70’s with enough line-up changes that would put you in mind of Great-Great Grandad’s hammer that’s had 10 handles and 5 new heads. So with the latest lineup of Tim Rossi, Rick Krasowski, Brian Carpenter and Matt Anastasi, are they delivering a 'genuine' Blackfoot album?

After listening to this 10 track southern drawl-laden, JD swigging, laidback, hard rocking album the answer is a resounding yes.

Kicking off with ‘Need My Ride’, this is a track that would sound perfect blasting out of a shotgun laden pickup truck, the bluesy southern rock sound ready cemented into ageing boards. Pure rock and roll with a cowboy hat firmly stuck on top.

Second on the list is ‘Southern Native’, the title track delivers again with a Floridian style that is hard rocking and laid back at exactly the same time. With vocals that just resound round the room like Lynyrd Skynyrd .

Next is ‘Everyman’, a beautiful slowed down ballad making you feel like you want to break open an Ace Pineapple hard cider, sit in a rocking chair on the porch and relax. Maybe with a shaggy dog sleeping at your feet. Essentially, a moment of just kicking back and chilling out.

‘Call Of A Hero’ is a perfect hard rocking tune with ubiquitous slide guitar thrown in. There is no mistaking it - this is southern blues rock kicking off. The only thing you have to decide is the hero on a 1700cc hog or a stallion.

There is almost a bit a Prog rock feel about ‘Take Me Home’ with its easy listening start before the torque kicks in to tow you into that southern style that is still slower than ‘Sweet Home Alabama’ but has that same longing sentiment. 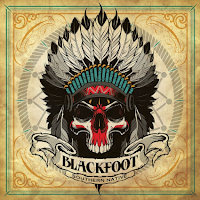 With a title like ‘Whiskey Train’ you know this is not going to be a slow tune. There is almost a Cream like feeling about this song that may put you in mind of ‘Sunshine of your Love’ or even Clapton’s‘Cocaine’. And that’s not taking away from this riffage loaded rootin’ tootin’ song. Solid song to stick on in the car when you’re driving.

Blackfoot continue to hit home with ‘Satisfied Man’ it thunders along with a perfect foot tapping rhythm. It is almost the perfect juxtaposition to the band’s previous classic ‘Diary of a Workingman’. Again another perfect tune for driving. All the more perfect if the sun is out.

Now the Crosby, Stills, Nash and Young’s song ‘Ohio’.  ‘Ohio’ is a protest song written and composed by Neil Young in reaction to the Kent State shootings of May 4, 1970.  The Blackfoot rendition is a fine cover filled with a Southern modern rock twist. Solid and enjoyable. 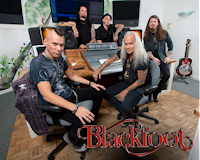 The tempo ramps back up a bit with ‘Love This Town’. Out of all the tracks this one has the most Country feel about it. Hard rockin’ and hard drinkin’ is all over this song with its wailing slide guitar reminding you you are one step away from southern blues.

The final track ‘Diablo Loves Guitar’ is an upbeat mariachi laden piece it gives that impression it should be on an Eagles album, at the beginning of a song about a hotel or something. It’s a fun little instrumental ending for the album and whilst vaguely feels out of place it’s a nice twist at the end of the tale.

If you haven’t come across Blackfoot before check out their Website, Facebook, and Twitter well worth checking out and delving into the band’s back catalogue before this great album lands on 5th August.