They may be long in the tooth and preparing for their final UK show at Bloodstock, but that doesn’t mean Twisted Sister are about to bow out, quietly whimpering there’s not a chance of that happening.


This Twisted F***ing Sister 17 track live album is a 17 pounder firing without mercy as each track is a visceral explosion hitting its target with shells of depleted uranium.


No armour will deflect this utterly fantastic piece of full-on energetic and passionate onslaught of pure metal. It kicks off with ‘What you don’t know’ a pure assault on your ears of primordial proportions.


Raw energy and emotion pores through the speakers only to lead you into ‘The Kids Are Back’. This will start to loosen up your neck muscles because starting to bang your head will be irresistible as you shout back during the chorus. This is rock that punches you in the face. And you will enjoy it.


'Stay Hungry’ rolls forward with the force of a tank at full throttle. It will just carry you forward with an unstoppable force of pure metal. A joy to behold. 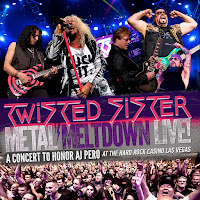 But what do you call this 80-ton armoured animal thundering towards you? Only one name comes to mind - ‘The Beast’. This is the fourth song and with it Twisted Sister smash through the barriers.


Next ‘Shoot ‘em down’ brings the poor bloody infantry to the gathering, wave after wave of them. You will not stop rocking out to this fantastic tune superbly delivered. ‘You can’t stop Rock ‘N’ Roll’ is the perfect motto for this whole album as its just keeps attacking anything in its way.


The assault on your ears has no let up and no respite as Dee Snider belts out the troop’s battle cry ‘I Believe In Rock ‘N’ Roll’ and you will be yelling it by the time the song finishes. ‘Under the Blade’ just pumps it out to keep your adrenaline flowing whilst ‘I am (I’m me)’, another Twisted Sister anthem, will push you on with its heavy thumping rolling beat.


What can be said about the next song? The most iconic of all Twisted Sister songs. If you have never really listened to them this is the one you will have heard it at some point in your life. ‘We’re not Gonna take it’ is guaranteed to be the song that will just blast out when the tank charge starts.


Then comes ‘The Fire Still Burns’ which is directly dedicated to AJ Pero and thunders over the hills into the frontlines without mercy, while “The Price” comes in the quiet moments after the last of the fighting is over.


After the retrospective moment you realise the melodic metal is not over. No, not at all as ‘Burn in Hell’ grabs your hand tight and pulls you on back into the thick fog of war.


Dee takes a moment to pay a heartfelt tribute to A.J. Pero, their drummer, and it’s a beautiful tribute to the band’s drummer and close friend. And to seal the deal the next song ‘I Wanna Rock’ pumps out raw unstoppable aggressive power that makes you want to raise your fist to the heavens. The penultimate song ‘Come Out and Play’ grabs you by the scruff of your neck and drags you out of your foxhole and into the middle of a full on metal firefight.


The final song is a fantastic finale as ‘S.M.F.’ is the perfect way to close this armoured fist of an album using a massive barrage of metal to make sure there is nothing left of the battlefield.


This is an essential addition to anyone’s metal library, a celebration of the heyday of the band and what makes music glorious; the ability to raise the spirit, throw the fist into the air and yell.


The full package features the complete concert, as well as ‘Rockshow’, a bonus documentary that will take you through the band's 40-year ride from local club outcasts to world domination with exclusive interviews, archive footage from the ‘80s, and photo gallery. It includes both BluRay and DVD formats as well as an audio CD.


Set for release on 5th August, it will be available just before Twisted Sister headline Bloodstock on 12th August which is at the end of their European tour, and their final ever UK show.


Review by Ivor Whitten
Posted by Jonny at 9:52 am