ALBUM REVIEW: Psyched out by Psykosis as they release Welcome To The Psyko Ward

In Ireland, north and south mental can be a compliment - used to praise those who are intent on fun at any cost to life, limb or....sanity.

Such is the case for Dublin thrashers Psykosis. They have earned that reputation through completely over-the-top high energy performances, causing chaos at Bloodstock by distributing free beer, 'wardrobe' malfunctions in the Limelight and all manner of high jinx.

But all the silliness matters not a bit if the music is crap. Fortunately, as they have proven since forming in 2011 they produce high energy, well crafted metal. 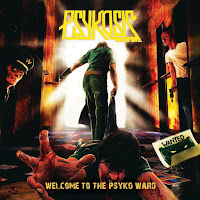 Finally they have committed the songs they have perfected on stages in Ireland and further afield to a record.

And, what a record it is. 'Welcome To The Psyko Ward' is a massive statement of intent from the band. Pulling together their influences - think Municpal Waste, Metallica, Megadeth and Anthrax sitting down over a shedload of beer, and Exodus and Testament crashing the party...

What stands out from Psykosis is the structure of the songs. Where many simply buck in a total wall of noise the high energy of the band doesn't clutter the sound.

Tony Corocran 's rhythm work melds perfectly with Jay Shaw's bass and Shane Byrne's drums (who has since stepped down, with now Tom Moylan behind the kit) to make sure the songs don't run away from themselves such as on the manic speed of 'Driller Killer" - even when some strange laughter appears...

Walsh's lead work is evident throughout, a counterbalance to his speedy vocal delivery.

Of course, lyrically Psykosis can sometimes plumb the depths of humour, but the tongue is so far into the cheek it is practically emerging to lick the unsuspecting who come to close.

However, it would be a mistake to think that they don't take their songs seriously. 'Tag Your Dead' chugs along with a nice sense of timing,

But, when all bets are off the closer 'Toxic Fugitive' calls you out and your neck breaks as you struggle for a last smile.

At first listen you may find some of the tones a little samey, but on subsequent listens you realise that this is deliberate: a clear intent to ensure a consistency on what are a relatively varied set of structures.

Having been proven live the band are clear they want those structures to remain intact.

Walsh said: "We tried keep the energy up as to what we would be like on stage, so it's like having us play live in your house or car or wherever! After a prolonged wait for this album coming out that day is almost among us and we cannot wait to share it with everyone."

The album is being released in September, but before then Psykosis will once again be creating merry hell at Bloodstock in August. We can't wait for both these momentous, mental, psychotic events. Uppa Psykos!

Review by Jonny
Posted by Jonny at 1:59 pm