VAN Zant are amongst the closest to the border between rock and country genres. Not that Country ain’t bad and all. The two genres have dallied with each other over the decades. Sometimes with interesting outcomes at other times ….. not so much.


When they released their first foray into this genre, “Get Right With The Man” they followed it up with a tour titled “Red, White and Blue”.


And, we would never have had an inkling of that live experience if Donnie’s long time .38 Special bandmate, bassist Larry Junstrom, had not just bought some mobile recording equipment and had permission to record the show in Georgia 2006. 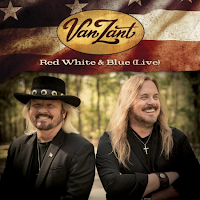 Now, 10 years later, in 2016 we finally get to hear that recording as it had lain forgotten till now. So let’s blow the dust off this recording, sit back, crack open a cold beer and see if the experience is worth it.


And from the very first track ‘Takin’ Up Space’ you can tell you will enjoy every moment of this Ode to Southern Joy. And as it was highlighting their album ‘Get Right with the Man’ you will hear no less than 9 tracks from that album.  ‘Takin’ up Space’ cracks of the 14 track live album in real southern don’t give a shit raucous manner with a driving rock rhythm amply supported by well-placed slide guitar.


Then we have ‘Ain’t Nobody Gonna Tell Me What To Do’, a slow country rootin’ tootin’ ode to sticking it to the man. Kind of fantasising about what many of us would like to do stuck in a job we don’t necessarily like. This is one of the more countrified songs but is a solid ballad.


Next comes ‘Sweet Mama’ with that arena country vibe that is not pure country and has a rock feel designed to get the audience jumping and waving their arms in the air. You can almost see that when listening to this song.


Now a bit of a shout out to the past pedigree with ‘ Wild Eyed Southern Boys’ a song coming from the .38 Special stable, which Donnie was formerly the singer in. This is a lighter AOR style song that would fit perfectly into a light hearted upbeat montage of a 1980’s semi-serious RomCom. It may not be to everyone’s taste but the execution of this tune is superb and you can feel the smiles of everyone in the audience enjoying this kick back song.


Back to the 2005 album with ‘Things I Miss The Most’ which feels like this is one of the songs Jon Bon Jovi listened to to get inspiration for Blaze of Glory – no, not the lyrics but the distinctive guitar sound and laid back style. Apart from that this is an incredible country song full of all the usual country tropes like dirt roads, tractors, dogs barking, the front porch, Pa and Mama. But it’s an enjoyable journey.


The tempo picks up a bit again with ‘I Know My History’ a glorious southern rock style journey down one of the great tropes of rock and roll – wink wink, nudge nudge. This a great stadium song and hearing it live adds a bit to the experience. Solid song delivered by a solid performance.


Now comes ‘Help Somebody’ taking us back to the slow drawled out drumming out solid positive advice on how to lead a good life. This is definitely a lighter in the air song.


Back to down and dirty grooves with ‘Plain Jane’ that has a great light touch southern feel about it delicately walking the line between arena country and rock and roll. This is one people can learn quickly to sing along to without forgetting too many lines.


Let’s slow it way down now with ‘I Can’t Help Myself’ as the band cross over into country gospel. Not everyone’s cup of tea, or JD, in style but the power and authority of Jonny and Donnie’s voices is without question.


Then the self-confident ‘I’m Doin’ Alright’ comes through with the country feel but with a solid rock platform. A classic style rock melody spruced up with southern country. Brilliantly solid fun song that will have you foot tapping and head nodding in polite company, whilst on your own or at a gig you’ll be foot stomping and head banging.


In a salute to being American and the US troops ‘Red White & Blue’, originally performed by Jonny, in the reunited Lynyrd Skynyrd, we have a schmaltzy slow eulogy to redneck stubbornness and pride.


The pedal is slammed down again as ‘My Kind Of Country’ comes hard driving round the local NASCAR track with a pretty young thing in the passenger seat and a hard working chisel chinned cattle roping dude crushing a beer can out the window firmly grips the steering wheel. The car of course can be nothing else other than a bright orange 1969 Dodge Charger . It’s just a ‘good old boys ain’t doin’ no harm’ kind of song.


The album is brought to a close with two Lynyrd Skynyrd tracks, and it is a perfect way to do it too. First up is ‘Call me the Breeze’ a great ‘Jonny B’ Goode’-esque romp and to finish it all up the last song could only be the absolute Lynyrd Skynyrd classic ‘Sweet Home Alabama’. Nothing needs to be said other than it was a great rendition by Van Zant.


Overall, this was a great 14 track live album that would not be too out of place sitting next to your rock and metal music collection. Well worth the experience.


Review by Ivor Whitten
Posted by Jonny at 2:58 pm