IN ancient Minoan culture the deities were female, worshipped and obeyed by the fearful populace before that culture, centred on the island of Crete disappeared. Now, in the 21st Century the deities have emerged once more - and they wanna rock.

We refer to Cretian punk goddesses Barb Wire Dolls, who upped sticks from a commune in 2010 at the height of the economic crisis that brought Greece to the brink of financial collapse and headed off to Los Angeles.
'
Now, six years later they have released their new album 'Desperate' and have managed to pull off an amazing trick: the perfect blend between classic old school punk sensibilities accessible to rockers and metalheads alike. They're even playing Wacken this year...

Having received plaudits from many a luminary in the music business, no less than Lemmy having uttered his appreciation of the band...and signing them to his label Motörhead Music. 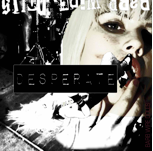 And, on this release they show why they have attracted so much attention with their live performances and two previous albums.

This is the album where they have harnessed the potential from their earlier work with singer Isis Queen achieving laid back vitriol, but what makes this really stand-out is the riffs and rock from lead guitarist, Pyn Doll and rhythm guitarist Remmington, such as on the track 'Take Me Home'.

That track teeters on the edge of 80s hard rock, from the streets around the Whiskey, before the punk attack of 'Heart Attack' reminiscent in parts of Black Flag.

That comparison is perhaps both the strength and what could see as the weakness in Barb Wire Dolls. They wear their hearts and influences on their sleeves;  at times a dash of Ramones, a pinch of BF, a sprinkling of G'n'R and a liberal dose of NOFX, all mixed in with rock 'n' roll á la Motorhead.

But, instead of assuming that they can't produce anything original better to consider that they have indulged in a mind meld with their elders, dragged the collective spirit and inspiration from their predecessors and used the result to produce something that is varied and engaging.

Title track 'Desperate' has an insistent groove that could have suited many grunge bands of the 90s (Nirvana and Soundgarden spring unwittingly to mind after a number of listens) yet retains enough punk and rock, especially after the two minute 30 mark, to have you listening intently.

All of which makes the acoustic opening of 'Blind To You' throw you for a few seconds, before the sparseness of Irele Blacque's bass and Krash Doll's drums behind Isis Queen's drawl vocals gives way to a booming full-on chorus. Ratt, G'n'R, Ugly Kid Joe et al will listen to this, scratch their heads and ponder why they never achieved this balance of song writing and reined in fury when penning albums.

There are no lame duck tracks on 'Desperate', with each track seeming like a hit punk/rock single in their own right.

'I Will Sail' has poignancy and anger that the current generation of pop punk acts polluting the 'rock' channels can only dream of, while 'Problem Of A Poet' echoes Joey Ramone's 'Poison Heart' adding a new twist.

The Minoan civilisation may have disappeared through the Theran eruption around 1,400BC, but the ancient Minoans, as they trembled to volcanic eruptions and tsnumi waves could have some crumb of comfort that their Cretian descendants are creating their own type of explosion.

This is an album that comes from a commune, draws on artistry, pulls at the latent strings of punk, swallows whole rock and metal intent and is one we would love to see performed in its entirety live, loud and proud.

'Desperate' is released on Motörhead Music on July 22nd.