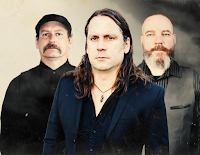 Featuring Bruce Lamont (Yakuza, Bloodiest, etc) on horns, voice, electric piano and synth, Dave Witte (Discordance Axis, Municipal Waste, etc) on drums, and Aaron Dallison (Keelhaul) on bass, voice, and synth, Brain Tentaclessees the threepiece weaving their way through twisted, seizure-inducing compositions that call to mind the insanity of John Zorn's storied project Naked City and Mike Patton's most erratic experiments.
BRAIN TENTACLES are said to be "masters of tension: the album moves unpredictably from mathy chaos to ponderous, juddering grooves that warp time in their wake, darting from one extreme to the other via insane rhythms and truly progressive, expansive songwriting." Occasional vocals (including a guest appearance from Oxbow's Eugene Robinson) lend an even sharper edge to the album, which is sure to blow away fans of instrumental and vocal-driven music alike. Produced by Sanford Parker (Minsk, YOB, etc) and features artwork by Jef Whitehead of Leviathan!

The first new song from the album, "The Sadist," has premiered via Decibel Magazine - hear it now at this location or below. You can also stream the album track "Kingda Ka" (which was previously released on a split with labelmates Ringworm) via the above Decibel link or here.

Brain Tentacles is due out this September 30 on CD/LP/Digital via Relapse Records. Physical and digital pre-orders are available at this location.
BRAIN TENTACLES support dissonant death metal legends Gorguts and stoner/prog heavyweights Intronaut on a month-long tour of North America this coming October.
Posted by Jonny at 12:39 pm