SWEDISH metal band AVATAR announce a headline show at Oh Yeah Centre, Belfast on Monday November 21st 2016. The band’s new album 'Feathers & Flesh' was released in May of this year.
And, last time they were here it was a helluva good show (review of it is here).
Avatar came of age as “little brothers” of sorts of the famed Gothenburg scene that spawned the celebrated New Wave Of Swedish Death Metal.
Within Avatar’s diverse songs, a steady focus on the fluid and organic power of the riff (recalling the thunderous foresight of heavy metal’s original wizards, Black Sabbath) takes flight combined with an adventurous sprit veering off into the astral planes of the psychedelic atmosphere conjured by pioneers like Pink Floyd back in the day. 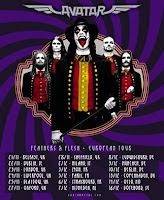 Avatar has found a footing that combines the best of rock n’ roll, hard rock and heavy metal’s past, present and future into an overall artistic presentation that is thought-provoking, challenging and altogether enchantingly electric. With the grandiose showmanship of American professional wrestling, the snake oil salesmanship of early 20th century vaudevillian troubadours and the kinetically superheroic power of early Kiss, Avatar lays waste to lesser mortals with ease. Whether somebody gets their rocks off listening to Satyricon or System of a Down, they’ll find something suitably deranged here.


“We’re in this weird field, caught in a triangle between extreme metal, rock n’ roll and what can be described as Avant-garde,” confesses Avatar vocalist Johannes Eckerström. The all-enveloping theme park vibe of the band’s music and visual counterpart means that, naturally, “it’s turning into something bigger.”

“I have been in this band for ten years. I grew up in this band,” Eckerström explains. “We’re somewhat veterans on the one hand. But we’re the new kids in the neighborhood in America at the same time.”
Tickets, priced £16 (+booking fee) on sale Monday July 18th at 9am from www.shine.net, www.ticketmaster.ie Katy’s Bar & Ticketmaster outlets nationwide.
Posted by Jonny at 5:03 pm