Formed by an all-star cast of scene veterans, heavy metal force SUMERLANDS burst out of the gates with a fully-formed sound on their Guardian demo in 2014.


The band's sound is one that calls to mind the most learned heavy metal ancestors and the most forward-thinking newcomers: one that sounds old but it feels new. In its short existence, the band has already garnered widespread praise from the likes of Sputnik Music, No Clean Singing, and Pitchfork, the latter of which said: "Sumerlands sound like Cirith Ungol and every lost 80s American power metal band on steroids of steel, getting

Now, Relapse Records is proud to join forces with SUMERLANDS for the release of their incredible self-titled debut album of classic heavy metal. Inspired by the timeless guitar-driven sound of the 70's & 80's, SUMERLANDS feature former Hour of 13 / Atlantean Kodex vocalist Phil Swanson as well as renowned producer Arthur Rizk (Inquisition, Power Trip, Pissgrave) on guitars and behind the boards. 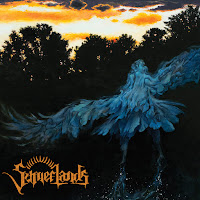 
Powerful guitar riffs and galloping rhythms meld flawlessly together with soaring vocals and pristine production to create strong, hook-filled, moody anthems. This is a new wave of American Heavy Metal at its finest!

Additionally, Sumerlands features artwork by the legendary Jos. A. Smith, the renowned and prolific artist who originally created the Bathory goat in the 70s. The album is due out this September 16 on CD/LP/Digital. Physical pre-orders and packages are available via Relapse.com here, and digital pre-orders can be placed at the band's Bandcamp page here.

Hear the first single "The Guardian" now via MetalSucks at this location.
Posted by Jonny at 1:05 pm