There is, however, a healthy metal scene in Israel, but death metal has a new flag bearer, in the shape of Nothing Lies Beyond.

After their formation five short years ago the band are about to release one of the best death metal albums of the year so far, 'Fragile Reality'.

Labelled as 'melodic death metal' this does not really capture the intensity of the band's approach, which ranges from Norwegian/Gothenburg styles, through to almost mainstream metal.

What it really showcases is technical aplomb, well structured songs and an overall sense of prowess. 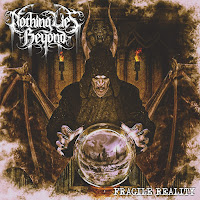 From 'Closed In Chains' through to the shout-tastic 'We Are Revolution' there is a deep impression of a band that has learned from the masters of metal and their predecessors in death metal.

The frenetic pace of 'Lost' does not diminish from the intricate inter-play between Danny Nishkit and Tal Perets Singer's guitar work, which seamlessly moves from riffs to licks and solo runs that compliment the track.

Nowhere is this as clear as on 'Fading Behind False Eyes' (originally from their 2011 demo of the same name), which opens with Ido Asa's guttural vocal start to emerge as a song carefully built up to a stunning melodic core with Alon Gani (bass) and Ariel Lior (drums) propelling the track towards a delicate intermission where an acoustic lick introduces a melodic core before the brutality returns.

Indeed what sets this apart from many is that there is a core of melodies and riffs that you could almost use this as a death metal introduction for those fearful of taking the step from hard rock/metal.

They may recoil a little from Ido's (excellent) vocal ferocity but when they hear the solo and rampant rhythm on tracks like 'Final Fight' and 'Visions' they may just be converted to the richness of all things 'deathly'.

However, where mainstream metal fans will be finally caught hook line and sinker is on the album's final track 'We Are Revolution' - a true rallying cry. This is four and a half minutes that many contemporary metal acts could learn from.

Sure it's not anything new in its combination of all-out pace, fierce solos and melody, but it is written and performed with a freshness. And the chorus is simply one of the best out there for many a year. We suspect that the likes of Five Finger Death Punch and Disturbed will be nicking this one.

What Fragile Reality proves is that sometimes when you cast your net a little beyond what the Western European and US sccenes you find real gems that have followed and are now passing the so-called elders; surpassing what the 'metal' mags want us to buy into.

Nothing Lies Beyond - we hope a lot lies beyond this release for this five-piece.