ALBUM REVIEW: Whitechapel move towards maturity on Mark of the Blade

WHEN a band reaches the 10-year-mark and notches up its sixth studio album, on top of an ep and live release, you would think that they would be given the opportunity to allow their sound to mature and evolve, as a person is allowed similar space 10 years from their youthful exuberance.

But, initial critical notes on Whitechapel's latest release, 'Mark Of The Blade' has focussed on how far they have moved from their 'deathcore' roots and - shock, gasp - the use of clean vocals.

Take a step back from scene and genre prejudices and this album is a balancing act between the band's origins and newer approaches - and they manage to pull it off.

There has also been some comparison between Whitechapel singer Phil Bozeman and Corey Taylor, especially on 'Bring Me Home' and 'Decennium'

So what? He can't help how he sounds no less than any other singer.

But, where you see t 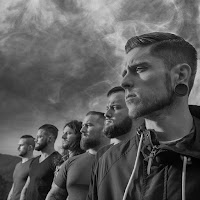 he depth of the new(ish) Whitechapel is the furious 'Elitist Ones', a mid-paced stomp of indignation at this messed up world., where the top tiers look down on a "self absorbed population of scum".

True, the lyrics are mainly along those lines, apart from the aforementioned 'Bring Me Home' and Decennium', but it is the clarity of the vitriol on 'Elitist Ones' that perhaps points to the future of Whitechapel.

They will never desert their beginnings - that much is clear on opening duo of  'The Void' and the title track, but they are maturing and exercising muscles left relatively unused on previous releases.

Fer feck sake there's a piano in there, notably at the close of the cinematic instrumental 'Brotherhood'.

The crucial question is whether this release will retain Whitechapel's core fanbase and draw new listeners.

What can only be hoped is that existing fans aren't obsessed with the past and are prepared to see the band's overall output rather than harkening back to 'The Somatic Defilement' and 'This Is Exile'.

And, new listeners will be prepared to set aside the labels and see a band rising up in 2016.

Mark Of The Blade is out now on Metal Blade

Email ThisBlogThis!Share to TwitterShare to FacebookShare to Pinterest
Labels: Mark of the Blade, Metal Blade UK and Ireland, Whitechapel