On July 22nd, Revocation release their most dynamic, boundary-pushing and weighty record to-date: Great Is Our Sin.

The band has also released another track from the album, entitled "Profanum Vulgus". The song can be streamed at: soundcloud.com. 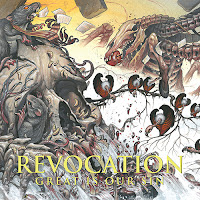 Additionally, Revocation has just released a video providing in-depth footage from the recording process of Great Is Our Sin, which can be viewed at: metalblade.com/revocation - where the record can be pre-ordered in various formats and the previous singles ("Communion" and "Monolithic Ignorance") can be streamed.


The lyric video for "Crumbling Imperium" can also be seen below.

Reuniting with producer Zeuss (Hatebreed, Bleeding Through), who also helmed 2014'sDeathless and 2012's Teratogenesis EP, Great Is Our Sin packs the requisite punch, yet retains the organic feel with which it was conceived.

Known for their technical prowess, the band remained dedicated to upping the ante without ever losing sight of the importance of good songwriting. Whilst the lineup has changed over the ten years Revocation has been in existence, David Davidson's (guitars / vocals) passion has never waned, and they are arguably sounding better than ever as they look toward the future. "We can't wait to bring these songs out on the road and perform them for different audiences all over the world," Davidson comments. "'Great Is Our Sin' is a new chapter for the band, and collectively we feel that it is our defining record to date."
Posted by Jonny at 2:18 pm