MUCH maligned by metal 'purists' power metal roots are firmly based in the 1980s when a host of European bands hooked on to the sound of the New Wave of British Heavy Metal, and Maiden in particular to produce what some saw as a watered down version of what the 'Brits' were producing.

However, as the 80s progressed bands such as Helloween, Running Wild, and Rage developed their sound that by the late 1990s it could be justifiably said that their power metal approach had taken them away from their influences and had a genre all to themselves.

Evidence that these acts don't give a flying shit about what the UK press or online commentators think is now in abundance. Helloween released a stormer of an album in the shape of 'My God Given Right' and now Rage have upped the power metal stakes on their new LP. 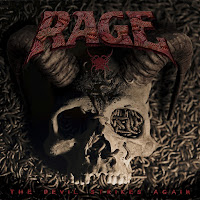 'The Devil Strikes Again' is unadulterated metal fun. Don't even try to think about it being a power metal album, just harken back to the days when you played air guitar in your bedroom and listening to metal for the sheer hell of it, no pretences, no over developed sensibilities...

Listening to tracks such as 'Back on Track' from this album just makes you grin.

Peavy Wagner has always been the man with the vision behind Rage, from writing, to his bass playing to vocals to production. All of which are easily identifiable on 'The Devil Strikes Again'

Guitarist Marcos Rodriguez plays with energy and some deft touches (check out War'), while Vassilios 'Lucky' Maniatopoulos has a variety of drum techniques to add to the sound rather than just try to keep pace.

As with all Rage releases the riffs roll out, pacey and precise, the melodies are infectious and the choruses yearn to have a crowd sing-a-long with each and every one.

But the real stand-outs on the album are the duo of 'Ocean Full of Tears' and 'Deaf, Dumb and Blind' with their dynamic use of tone and pace and one scorcher of almost Blackmore-ish solo on the latter.

Yes, at times there are some off-beat homages to their influences (Rainbow, Judas Priest, early Accept) but they are more a tip of the hat rather than anything else.

It's hard to think that this is Rage's 22nd album but Peavy is clear that they tapped into their illustrious past.


“With our new album we wanted to deliberately build on the energy and the spirit of our classic albums from the '90s," he said. "We focussed again absolutely to the songs, hard and straight, with awesome melodies."
The collaboration with Marcos and Lucky works extremely well, it had been a long time since I was so inspired and felt so liberated during songwriting, and so some of the best tracks that I could ever record with RAGE came about. We are more than proud of this album and we can’t wait to bring 'The Devil Strikes Again' to the stage.“
Have to say that we're pretty much of the same opinion.
Review by Jonny
The Devil Strikes Again is out now on Nuclear Blast