PAIN, the unique Swedish metal project led by multi-instrumentalist and renowned producer, Peter Tägtgren (Hypocrisy, Lindemann), are ready to unleash the follow-up to 2011's ‘You Only Live Twice’. 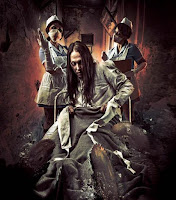 The release of this record is scheduled for September 9th through Nuclear Blast.
In celebration of the new album, the band have released the first album trailer today.

You can check out the trailer here.

The band have also released a new track 'Black Knight Satellite' - the video is at the bottom of this post. You can order the single here: http://bit.ly/PainBKSiTunes or listen in NB Novelties playlist: http://sptfy.com/2zZF

The artwork for new record ‘Coming Home’ was created by Stuttgart artist Stefan Heilemann (Epica, Lindemann, Indica) -  whose artwork is famed for its symbiosis of fantasy, reality and insanity. 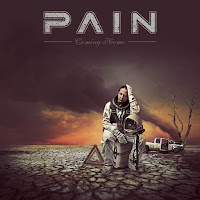 "I was brainstorming about the cover with Heile again... And we got the result that I really needed. I rented a spacesuit and spinned away thereafter... Musically, the album is a development of where PAIN and LINDEMANN ended at - more experimental than what I've ever done before. Acoustic guitars and a helping hand again from Clemens of CARACH ANGREN with the orchestra arrangements, and some guest vocals. And Sebastian Tägtgren did a great job on the drums..."

So said Peter Tägtgren, musician, producer and creative brain behind Pain, Sweden's finest industrial metal export. His has been a life immersed in music, in pushing boundaries, and taking ideas to both their logical and illogical extremes. It’s been a career that has involved fronting bands – notably iconic death metal veterans Hypocrisy, and now PAIN – or shaping their sounds – as he has done with Celtic Frost, Children Of Bodom, Dimmu Borgir and Immortal amongst others. It’s a calling that has made him one of Europe's most highly respected musicians and producers.

PAIN started life as a hobby for Peter Tägtgren, whose concept was to fuse heavy metal with 1980s-inspired electro-industrial and techno influences.


It all began with the release of a self-titled debut in 1997, and since then PAIN have released six more albums and a DVD.
‘Coming Home’ will be the eighth studio album release.