WHEN we hear the words "hip-hop" we normally wouldn't touch it with a barge pole - and probably wearing a hazmat suit and airport issue hearing protectors. But add the word 'punk' and we are intrigued.

Approaching the début release from Nova Twins cautiously, one gentle play at a time, slightly nervous that we might like it, members of the team circled around as each track emerged.

The death metal correspondent cast evil looks, muttering spells to protect his black heart, but we dared to give it another listen...

To our surprise, we actually liked some of the tracks - not all but some of them.

'Drums' has that hip-hop edge, but bass has a real feel, an almost garage rock feel to it, while 'Hit List' has an urban punk edge. 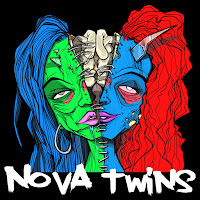 The Nova Twins are Amy Love & Georgia South, and this release is issued through Robo Tunes. Why they decided to release it remains a moot point. But on reflection we decided to focus on the word punk.

To often punk is bracketed into the clichéd buzzsaw guitar sound, but the true spirit of punk is best encapsulated by the likes of The Clash, who had almost as much reggae and blues tracks as they did jagged punk.

As such, while Nova Twins will not be on our decks too much, we still have to respect that there is something unique and intriguing on this release. Worth at least a listen, even if it is only to try something different.