Norwegian-American electronic hard rock/heavy metal group Combichrist returns with its eighth studio album 'This is Where Death Begins' on June 3 via Out of Line Music.

To celebrate its imminent release the band have released a lyric video for the track 'Skullcrusher' (see below. 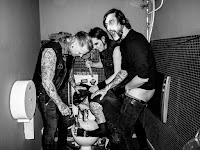 The blurb:
An apocalyptic behemoth of guitars, electronica, infernal drums and dark elemental force, This is Where Death Begins was produced by Oumi Kapila (Filter) plus Combichrist's own Andy LaPlegua and mastered by the legendary Vlado Meller (Red Hot Chili Peppers, Slipknot). The 15-track album also features guest vocals from Chris Motionless (Motionless in White) and Ariel Levitan (MXMS).

"I finally feel like we came full circle with this album, considering we're all from the punk rock, hardcore and metal backgrounds. After 10 years of electronica in the studio and a full live band, I feel like I captured the live sound and energy. Every style of music that I have done through the last 25 years has some kind of presence on this.”