MOTIONLESS in White - who played in Belfast earlier in the year – have released a new single, entitled ‘570’ and have signed to Roadrunner Records.


The track is out today (24th June) and is streaming on the band’s YouTube Channel (see below).

Motionless In White said: “We are very honoured to finally announce that we have signed with Roadrunner Records. Over the past few months, we’ve had the privilege of getting to know the hard working team that makes up Roadrunner, and felt a connection with their company immediately.


“It has been a dream of MIW for years to someday sign with their label, and we are elated to find that it is a perfect home for the band to continue building our career. We are very excited to start this new chapter and to keep working hard every day with Roadrunner by our side. Thank you to Roadrunner Records for opening your home to us, and thank you to all of the fans that have supported our band tirelessly over the years. Your support and contributions have helped lead to all of these amazing developments taking place for our band. We’re looking forward to many more years of this with all of you.” 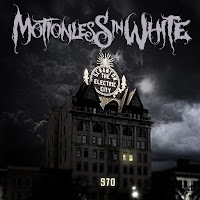 Motionless In White is currently working on their fourth studio album and full-length Roadrunner debut, slated for 2017. “570” marks the band’s first new release since 2014’s chart-topping “REINCARNATE,” which debuted at #1 on Billboard’s “Top Rock Albums” chart as well as at #9 on the overall SoundScan/Billboard 200. Motionless In White’s third studio album was highlighted by the blockbuster title track, a top 20 Active Rock radio favourite in the USA accompanied by a striking companion video now boasting close to 10 million views.


Motionless In White launch “570” with nearly a set of tour dates, kicking off in the USA with this year’s Vans Warped Tour ’16.


Founded in 2005, Motionless In White – whose frontman, Chris Motionless, graces the cover of Alternative Press’ current Vans Warped Tour ’16 special issue – are among the top nominees for the 2016 Journeys Alternative Press Music Awards Fueled By Monster Energy, with nods including “Best Live Band” and “Artist of the Year Presented By Monster Energy.”

Email ThisBlogThis!Share to TwitterShare to FacebookShare to Pinterest
Labels: Motionless