THRASH. When it is done well there is no purer adrenaline rush, that feeling that your face has been dragged through s barbed wire fence, yet you are still smiling.

The new Bull-Riff Stampede release, 'Enraging The Beast' has that effect, but with an added smack to the face. Yet, you'll still be smiling after they kick you in the ass all the way into the mosh pit.

From the title track opener, through to closer 'Lone Ember' they rarely put a foot wrong; no let-up, no remorse, just thrash. 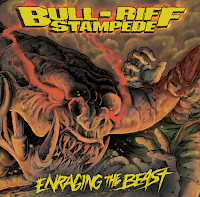 That's not to say that it is one dimensional. 'Mindless Heresy' drags in hardcore and raw punk to the riffage, without ever losing its metallic edge, while 'Bite The Nail (Reborn) has a classic metal intro that threatens to have you humming before the accelerator pedal is floored.

Dave and Jay deliver a masterclass in how to play thrash, with their guitars rolling along, combining the more brutal Bay Area sounds and a pinch of Teutonic thrash.

At times Dave's vocals veer towards death/black metal, such as an on '4125' but it enhances rather than detracts from the overall feel of the album, meaning that the listener never gets complacent.

Co-produced by Gabriele Ravaglia and the band it was mixed and mastered at Fear Studio in Italy by Ravaglia, and it is the production that once or twice falters with a few of the drum sounds. That is only a minor niggle as there is little to fault here, certainly not the performance of James as he tortures his kit relentlessly.

Aided and abetted by Rod's bass the rhythm section is remorseless, a platform that enables the band to teeter almost out of control, but with enough composure to beat you into gleeful submission.

This is a real development from 2011's 'Scatter The Ground' both in terms of sound and song writing. You sense that 'System Shocker' would not have had the legs earlier in the band's career, nor would the brilliantly technical opening to 'Lone Ember' been so well balanced in a song that doffs its cap to Gojira and Mastodon but is not a slavish copy of their sound.

And, that is the key to this album. Bull-Riff Stampede have managed to refine their sound, take what could be formulaic, draw in influences, add a distinctive British edge and allow the sound to flow.

'Enraging the Beast' is out on July 13th, we suggest you get a copy and have your face kicked in the best way possible.