THE longest living and most resilient tank of Poland’s death metal fleet has once again hoisted its flag – ready to overrun the world with its new triumphant procession.

They recently fired a preliminary warning shot with the release of their ‘Iron Times’ EP, [Read Dee's review here}and now Vader are building their own all conquering empire with new studio album ‘The Empire’ -  out on 4th  November via Nuclear Blast. 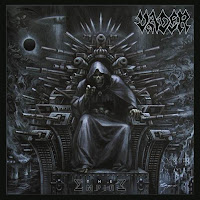 Today, the band has revealed the cover artwork of that new masterpiece.


Mastermind Piotr ‘Peter’ Wiwczarek said: "Here is the cover artwork for ‘The Empire’ created by Joe Petagno himself!!


“The design as a whole includes many details connected to the main theme which influenced me before and during the process of recording: war and the ‘cold crisis’ around us today.


“There are also links to couple of famous movie series, which influence the generations and erupt with violence, hate and ‘imperial tendencies’... Is this just a fantasy or maybe a sign of the 21st century generation?  You have to answer that yourself... and the future will show us. Enjoy ‘The Empire’ and join us on tour soon!"


The lyric video for brand new track ‘Prayer To The God Of War’ is out now.  Check it out below

Without doubt, ‘The Empire’ falls under the category of VADER’s classic albums. The impressive monument that they’ve built with their 13th studio album will immediately find its place in metal history. And it will also prove that VADER don’t need to make their peace with the world; they never did, and they certainly don’t now – especially after writing more than 30 years’ worth of death metal history.

The globally conquering weapon was produced, mixed and mastered by Wojtek and Slawek Wiesawski. ‘The Empire’ was completed within the secret bunkers of Hertz Studios inBialystok, Poland

Their brand new EP ‘Iron Times’ is available now digitally. You can order it here:  http://goo.gl/iYoO5Z

Email ThisBlogThis!Share to TwitterShare to FacebookShare to Pinterest
Labels: Vader