NEWS: Screaming Eagles on Buckcherry line-up - let's all Stand Up And Be Counted with the Screagles!

OUR very own Screaming Eagles will be special guests of top US rockers Buckcherry on the Irish leg of their 15th Anniversary World Tour.

The shows will take in Belfast (Limelight 2) and Dublin (Whelans) on October 12th & 13th 2016.
Screaming Eagles are currently working on the follow-up to their 2015 release "Stand Up and Be Counted'.

The new record will be released in Spring 2017 followed by dates in Germany and Holland as well as a full UK tour.

They already have a number of festivals booked for 2017 including SOS Festival in Manchester in July... 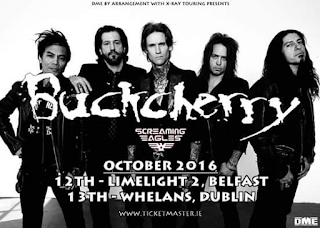