ALBUM REVIEW: The weight will be coming off with Crobot’s Fat City hard rock workout

CROBOT are coming with their second studio album, ‘Welcome to Fat City’ but will it ‘Steal the Show’ or just end up as ‘Blood on the Snow’?
Firstly, the inspiration of the album name comes from Hunter S. Thompson’s attempt to become Sheriff of Aspen. During his campaign he proposed that the famous snowy Aspen have its name changed to “Fat City” in order to deter investors from over capitalizing Aspen.

And, so 46 years or so later Crobot find it the perfect name for their album. But you will find that this album is not full of fear and loathing, but is an excellent Rum Diary.
From the first track and Album title, ‘Welcome to Fat City’, you get a good feeling of what you will be in for. This particular track is a swaggeringly funky piece of heavy blues rock that rumbles through the speakers with a hazy dirty sound. Brandon Yeagley’s screaming hard edged vocals perfectly fit the heavy driving rhythm.
Then we get some good gambling advice with ‘Play it Cool’ as it starts with a heavy Jimmy Hendrix style guitar tapping as it rolls on into a heavy bluesfest and Yeagley’s trawling voice reverberates through the chorus. Superb track. 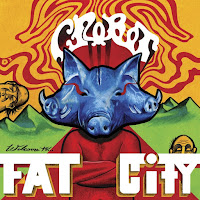 On comes something we all want. ‘Easy Money’ kicks off with a dirty funky rolling sound and keeps the beat chugging along. It’s heavy and upbeat at the same time.


Now we have ‘Not for Sale’ lands through the roof to a fast rolling explosion of sound and will chase you down with its grime filled blues funk. Excellent track that’s perfect for the car.


Which is perhaps foretelling the next song ‘Hold on for Dear Life’ the longest song at 4.49 with a slow paced doom stoner feeling as the edgy scream of Yeagley crawls over the undulating Black Sabbath like swaggering metal coming from the guitar, bass and drums.


Time now for ’Temple in the Sky’ as the song revs its metal engines to take you into the sunset. It’s another dirty fuzzy funky tune that is pure groove metal with a twist and has a movie credits song vibe


The next song will hit you ‘Right between the Eyes’ with heavy Iron Man style fists of thumping doomy rock and roll. It’s definitely another headbanging tune.


Beware the ‘Blood on the Snow’ as it will kick your proverbial metal ass as the heavy stoner rock rumbles through your speakers. Again they have hit another gritty groovy rhythm that just makes you want to rock out as it collars you and head-butts you in a firm rhythmic fashion.


Continuing into the album is ‘Steal the Show’ a swaggering tune that leads you on a fairly upbeat path until the chorus when it slows a bit to make sure it finds its mark with its heavy stoner boots. Quite a well-executed mix of speeds within the song


The penultimate track brings us ‘Moment of Truth’ a slow dirge like rhythm and blues tune with a dirty metal weight, as once again the doom groove grinds its way through the chorus.


The final song ‘Plague of the Mammoth’ is a thing of resonating heavy doom groove beauty. The depth of notes rumbles menacingly throughout this grimy hardened rock tune that feels at home living in your sub-woofer.


Overall, the Crobot album exemplifies an amalgam of familiar fat hard rock laden tunes from the past 30/40 years without sounding like a tribute band. There is a modern interpretive feeling. Crobot themselves describe this style as ‘Dirty Groove Rock’ and that describes it perfectly.


This is definitely an album to have as it should cross a number of boundaries just enough to have a wide appeal.


Out now on Nuclear Blast Records. Go get.


Review by Ivor Whitten
Posted by Jonny at 9:45 am