WHEN we first encountered Pain live supporting Nightwish in Belfast's Mandella Hall some years back we sagely stroked our chins in appreciation (actually we headbanged...) and their show was only over-shadowed by the theatricality of  'Wish.

But we delved deeper Peter Tägtgren's side project, having only been familiar beforehand with his work in Hypocrisy. And, we were pleasantly surprised by the industrial metal tracks.

Roll forward to 2016, still headbanging we delved deep into Pain's new release 'Coming Home' and the sagely stroking of the chin resumed, because we liked all the tracks, but, well there was a but... 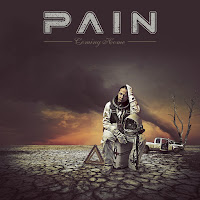 Opening up with the wonderfully titled 'Designed to Piss You Off' and the rampant 'Call Me' there were all the industrial metal elements in their correct places, but was there a hint of something more?

Yes, a tinge more melody and some subtle more traditional rock elements, as evidenced by 'A Wannabe'  and the riff-laden 'Pain In The Ass'.

Stand-out 'Black Knight Satellite' is a killer track (see below for Tägtgren's explanation), closely followed by 'Absinthe Phoenix Rising'. But the real surprise is the title track.

Layered, tender, balladic 'Coming Home'  is a delicate paeon to loss and regret, tinged with just enough hope to counter pathos and bathos: a huge chorus with keyboards, synths balanced against the guitar work and haunting harmonies.

Sure, some purists may turn their industrial noses up at this, and maybe remark that the opening of 'Natural Born Idiot' owes a little too much to Fear Factory, but as they push further into this track, for example, you'll find Tägtgren has urged more out of the Pain sound than ever before.

At times there is even elements of 'pop' sensibilities in the choruses of the songs, but there is nothing wrong with adding a new dimension.

Yes, it still is a metal album, but with enough variation and depth to make it an almost essential listen as the night's grow shorter and the cycle of nature slows.

When you consider this is the eigth album outing for Pain, this is still a fresh sounding selection of tracks...and you must stick around to the end to listen to 'Starseed'. You'll thank us for that!

Review by Jonny
Coming Home is out now on Nuclear Blast

Tägtgren's explanation for Black Knight Satellite...
“Nikola Tesla, who invented the lightbulb, electricity and other stuff, thought that he heard beeping sounds from space."
“It was around the year 1899 and it seemed like a message to him, a hidden code. He was the first one to discover it, but in the 1950s, when humans started to go into space, they heard the same noises and found out:
"There is some signal from a satellite out there... but it isn't ours. And as they started their research, they found out, that people had been talking about this phenomenon for around 13.000 years. The story of this so-called 'Black Knight Satellite' is very fascinating to me - but whether it is true or not... I don't know. But it definitely inspired me to write these lyrics."