GOJIRA have debuted their official music video for ‘The Shooting Star.’


Taken from their chart topping new album Magma, ‘The Shooting Star’ video is streaming now on Gojira’s official YouTube channel. The mind-bending video was directed and animated by Markus Hofko (www.bowbowbow.co). View it below.

This summer Gojira Magma took the number one spot on Billboard’s ‘Hard Rock Albums’ chart making them the first French band to hold the top slot on the chart in its nine year existence.  Magma marked the highest chart debuts of Gojira’s career across the world. 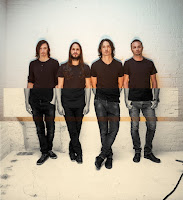 Later this month Gojira embark on a massive North American headline tour which continues through late October. Following that run, the band jet across the ocean for European dates with Alter Bridge, Volbeat, and Like A Storm in November/December.

Magma has been heralded by two stunning visuals pieces for album tracks “Silvera” and “Stranded.” “Silvera” is accompanied by a Drew Cox directed music video shot in New York City, which has received over 1.5 Million views on Gojira’s official YouTube channel while the official video for “Stranded,” directed by Vincent Caldoni, has already garnered 2.1 Million views and charted in the Top 25 on Spotify’s US Viral 50 chart.
For more information, visit www.Gojira-Music.com.
Posted by Jonny at 8:03 pm