LIVE REVIEW: Blackening skies as Vulperga, Drakonis and The Crawling land in Limelight

IF you like your metal dark, grimy and dangerous, then the Limelight was well and truly the place to be on Saturday night, with not one, but three blackened metal bands displaying their malevolent wares.
Up first was Valpurga, who are coming up to their twentieth year as a band. Consisting of just three people (and a drum track), they ascend the stage steps clad in all black, with vocalist Ruby Black wearing a sort of clingy black cowled dress with pentacle-link belt.

Despite their longevity they often seem a bit hesitant, particularly frontwoman Black, who seems ill at ease during the instrumental sections. No matter; her snarling scream is simply perfect for the band's atmospheric black metal, filled as it is with tales of darkness, soul stealing and Satan.

The fact that they stay 'in character' throughout their forty five minute set and don't interact at all with the crowd is a tiny bit disconcerting, but admittedly it does add to the sense of menace and glowering intensity of their music. 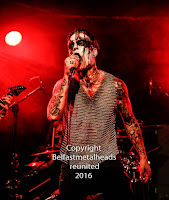 Beginning their set with a thunderous blast of noise, blackened death metallers Drakonis certainly get everyone's attention right away. Cleverly combining the icy atmosphere of black metal with the fiery roar of death metal, they are the sonic equivalent of a chainsaw, with songs that ripple and roil with menace – and when they pick up the pace mid-song, the result threatens to blow the bloody doors off the place.

Frontman 'Cass' Cassidy possesses an equally impressive voice, with a scream like the hounds of Hell leading tracks such as 'Ravens Fill the Sky' and 'Fear of the Wretched'. New track 'The Abundance of Sin', with its battering ram beat, also receives copious applause.

They, too, have the blackened metal look down pat, with corpse painted faces and Cassidy's chain mail vest (not to mention the skull hanging off his mike stand and his cat o' nine tails whip, which he occasionally uses to self flagellate).

Watching them perform, it's hard to believe they are still a fledgling band, having only played a handful of gigs with this line-up; impressive, indeed.

A smoky and atmospheric intro heralds the arrival of doom/death metal headliners The Crawling,
who – once the smoke clears – are instantly engaging, particularly vocalist/guitarist Andy Clarke, who is all intense glares and  mesmerising charisma, with a voice straight from the bowels of Hell.

Their richly textured songs combine both slow and fast sections – doom and death – with the faster sections simply commanding the crowd to headbang, which they do, ecstatically.

They play a mix of both current songs such as 'Catatonic' and, excitingly, new tracks from their upcoming, as yet untitled album, such as 'Violence, Vanity and Neglect', which has a thick groove and an almost stoner metal feel.

There's a real symbiotic relationship between the crowd and the band, with Clarke in particular feeding of the waves of applause and relish washing over the stage. And when they close their set with the magnificently creepy 'The Right to Crawl', with its buzzing fly intro and masterful use of pace changes, the flailing hair in the room could power a wind turbine.

Once again, it's a visceral and thrilling set from this talented bunch.

The black/death metal scene in Northern Ireland is in gloriously rude health right now, as was made abundantly clear tonight by the three bands who played so convincingly and so ardently. Menacing, bloody and murky: the kind of music that punches you in the gut and gleefully eviscerates you. Oh yes. 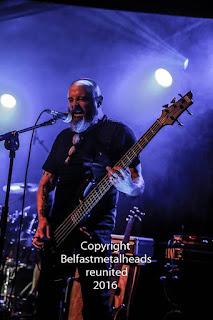 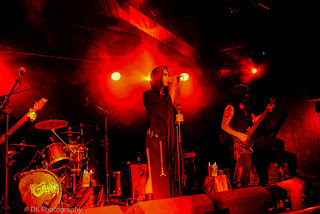 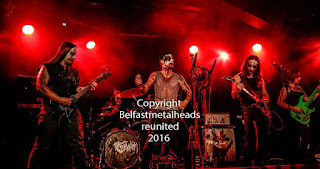 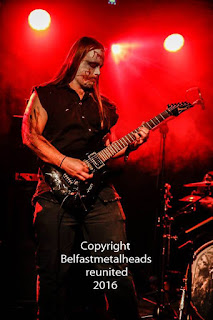 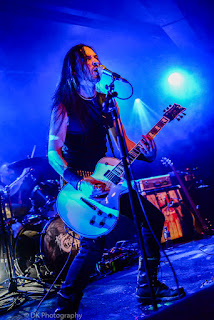 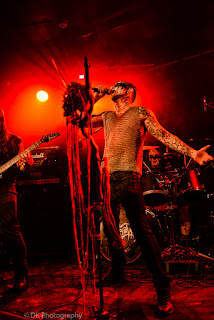 Email ThisBlogThis!Share to TwitterShare to FacebookShare to Pinterest
Labels: Drakonis, The Crawling, The Distortion Project, Valpurga

Unknown said...
This comment has been removed by the author.
9:17 am

Thanks for the review :) I just wanted to add a wee correction on our behalf! Valpurga has existed since 1997, but the current line has existed only since January 2016 and we've played only one other time together! That performance would have been shameful if we'd been together 20 years.... ! ;)

It was a brilliant night, we really enjoyed ourselves!