GAMES REVIEW: Get on the Festival circuit with Forza Horizon 3

Froza Horizon is a realistic driving game based around the fictional festival known as Horizon. This brings in a much more arcade like feel into the franchise which is known for a realism masterclass in the form of Forza motorsport.

This year's instalment of the Horizon series is one of the best games to be released this year. I may be a bit biased and the Forza games are some of my favourite games anyway. The game follows the story of, well... you! Over the course of the previous two games you have risen to the boss. You own the festival, and now you've travelled to Australia.

With the help of Kiera, who I swear is Northern Irish, your PR assistant who will organise the PR stunts and races. The festival will be better than ever

Warren, your trusty Aussie mechanic, probably the best character in my opinion will help you buy new cars and upgrade them to your specs. Might even join in on a Showcase event.

Now Showcase events. These are how you get fans, doing outrageous stunts in the name of fame. Can't get fans just doing races now can we. You are the host and you want to make people want to come. 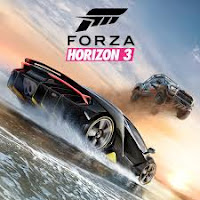 The bucket list challenges are still in the game and as always a fun little addition. Sort of a if this was your last day on earth kind of situation.

This year sees the new feature of blueprint mode where you can make your own race championships with the cars you like and race the way you want to. I mean you are the boss, right?

This feature even transfers across to the bucket list challenge, where you can choose any stunt and set your best score or time and task other players to beat it.

This game has so many features I could see myself playing this into the foreseeable future. Not in the same way but I'm still playing the Witcher 3 to this day and I can see myself playing Forza Horzion 3 in a years time. If I where to give it a rating, I couldn't it's too good to put an arbitrary number next to it. Now back to my Koenigsegg One:1! I still have to wait until I have a better PC setup to try the new Xbox play anywhere feature but from what I hear it works quite well.

Review by Zakk Traynor
Posted by Jonny at 6:38 pm