WITH Davey 'Basher' Bates stepping down, Stormzone have announced that drum duties will be taken over by Gordy Gray of Irontown Diehards.

Gordy will continue to play with the Diehards as well as wielding the sticks for Stormzone..

Stormzone are currently beginning work on their sixth album and will appear at DistortionFest 2016 on 29th October. 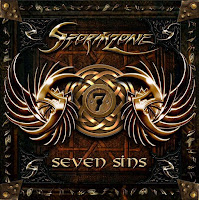 It will be their first show with Gordy anchoring the rhythm section as the band prepare for next year's tour and festival circuit.

Also on the bill at DistortionFest 2016 are Warrior Soul, Lord Volture, Rabid Bitch of the North, Zlatanera, Bloodway, Valborg, Blood Thread, War Iron, and Drakonis, with four more to be announced.

The event will run from noon until 9pm in Katy's Bar and Limelight2. Tickets cost £10.
Posted by Jonny at 6:28 pm

Email ThisBlogThis!Share to TwitterShare to FacebookShare to Pinterest
Labels: St