Glenn Hughes has released the official music video for ‘Heavy’ – the first single taken from his forthcoming album ‘Resonate’. View it below.

From album opener, ‘Heavy’, to the very last chords of the closer, ‘Long Time Gone’ some are already tipping ‘Resonate’ to be a contender for 'Album of the Year'. 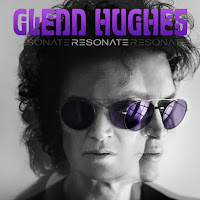 The album features his live solo band members, Soren Andersen (guitars and co-producer), Pontus Engborg (drums) and newcomer to his band, Lachy Doley (keyboards), in addition to long-time friend and drummer, Chad Smith (of Red Hot Chili Peppers), who joined them in the studio for the opening and closing numbers.

It might well be the most heavy sounding of his solo albums, but as is his trademark, musical diversity shines through and as Glenn commented upon completion of the new recording, "This album is the first kind of a complete Glenn Hughes album," said the man himself.

Hughes will tour the UK this autumn, including a slot at HRH X