ALBUM REVIEW: Usurpress wear their influences on their sleeves on The Regal Tribe

WITH a website that reads as “The home of the death crust d-beat band Usurpress” and hailing from Sweden, you’d be forgiven for expecting to hear another clone of the legendary Entombed.

Of the ten tracks presented on “The Regal Tribe”, Usurpress offer much, much more than just that.

The opening gentility of “Beneath the Starless Skies” treads some familiar territory but not from where you might think. The introduction to this album would have fit perfectly onto Mastodon’s “Crack the Skye” before breaking into an all-out d-beat influenced black metal assault. 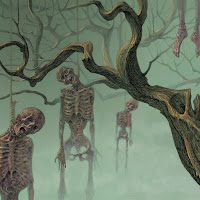 Following a few bars of this breakneck frenzy, it opens up again into Black Sabbath territory with an open and spacious break to the tempo before resuming the pummelling for the last thirty seconds. One song in and we’ve been given more than a lot of bands offer over an entire release.

A talking point should really be how seamlessly they shift from one influence to another. At no point over this record did any of these paradigm shifts ever seem at odds with each other. It frequently takes the listener by surprise but would never be considered disjointed.


Another thing that really impressed me was how the first five tracks on offer here blend perfectly into one another.

The entire A-side of this record is tied intricately together in such a way that it doesn’t feel like a collection of songs but rather a continuous journey across their influences. It’s a ride I didn’t want to get off.

The second half of the record is no less impressive. By the time we get to “Behold the Forsaken” and its absolute menace, I found myself waiting with bated breath for whatever fury came next. Another song which changes pace, tempo and tone frequently, they again manage to do so without losing momentum or sounding like a directionless mess.
We get three minutes of respite with “On a Bed of Straw” with its almost Sleep-esque stoner influenced meandering before being greeted with “The Sin That Is Mine”, the most classically black metal sounding song on the whole album. Seething with mid-paced venom, we’re met with shades of Darkthrone and Mayhem before closer “In the Shadow of the New Gods” breaks out of the stocks with its furious and thrash laden riffing.

Another masterful display of how they can shift from circle pit inducing frenzy into slowed down, sludgy groove: this would maybe be the most obvious nod to the aforementioned Entombed but still retains its own sense of identity.
All in all, this album gave me a lot more than expected. It is completely uncompromising in its vision and treads some often avoided water in extreme metal. There are a myriad of different sonic influences but to name just one that sticks out the most would be insulting.

What Usurpress have achieved with “The Regal Tribe” is a master class in how to wear your influences on your sleeve without being slaves to them. 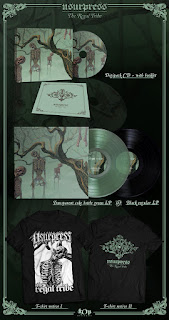 Email ThisBlogThis!Share to TwitterShare to FacebookShare to Pinterest
Labels: The Regal Tribe, Usurpress