RIGHT you happy metal fiends, you read the headline right, Iron Maiden are back on a European arena tour as part of the Book Of Souls cycle and there will be an Irish date.

This morning (Friday 23rd September) the band confirmed they will play Dublin's 3Arena on May 6th.

And, having seen the Irons rip up a sodden Download earlier this year this is a set not to be missed. Hell, all Maiden sets are not to be missed but they are on a form that is rarely equalled amongst any band.

Bruce has beaten the cancer, Steve will have British Lion out of his system, and the rest will, as always make other acts look like sloppish amateurs.

Of course, Bruce announced the 2017 arena tour from the stage at Download, something which he has 'form' (on stage with Bon Jovi at the 1987 Monsters of Rock he told the crowd "see you next year). 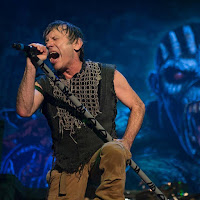 This arena tour has also been trailed officially by the band with the various streams announcing the aim to beat the ticket touts with a largely paperless ticketing system, something the band have trialled in the past

Book of Souls - the ambitious double album released in September 2015 an clocking in at a mammoth 92 minutes - scored Maiden their fifth UK number one album and a plethora of top slots in charts across the world.

Steve Harris said of the tour:

“The whole band is really enjoying this tour and though we love playing festivals and stadiums, it is terrific to return to the intimacy and atmosphere of arenas for a few shows.

"The songs from The Book Of Souls album and the new Maya-themed Eddies and stage sets have gone down really well and fan reaction has been amazing. And of course we know our fans appreciate us playing a lot of the older songs too, which we will continue to do."

Support will come from Shinedown.
Tickets go on sale on Friday, 30th September at 9am. 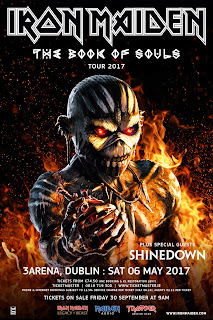