When you take a album review from a band you’ve never actually heard it pays to do a bit of research and surprisingly DGM, who are an Italian progressive metal band, have been knocking around for the guts of 20 years and in “The Passage” are releasing their 8th studio album.

The strange name derives from the initials of three of the original band members, none of whom are still in the band? Bypassing that like the Zika virus and noticing they have been likened to Symphony X ( toured with them, Russell Allen has guested on a previous album and guitarist Michael Romero plays on this) we dive in.


Opening with the 16 minute opus “The Secret”, split into two parts, the similarity hits you up the face. Not so much a copycat but their own twist to that sound. 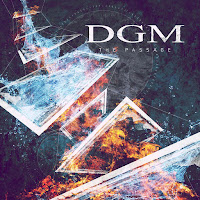 A piano and keyboard intro blends into a mixture of crushing riffs, steady bass and drums sections but also staying quite melodic in places. The joint guitar/keyboard solo is a feature repeated throughout the album.


Part II of The Secret has a more melodic guitar sound but also has some very latter day Metallica riffs thrown in for good measure. The most noticeable thing is Marco Basile’s vocal delivery, not so much a full on screamer but with a lower tone that blends very well with the overall sound.


“Animal” is more melodic in nature but still powerful. A standard mid tempo song with some nice technical guitar playing from Simone Mularoni, who also delivers a pretty tasty solo. First time hearing this guy play and it’s well worth the wait!


“Ghosts of Insanity” features Tom England of Evergrey on shared vocals. With a fast paced riff and double kick drumming book ending this mostly mid tempo song it features a bit of techno keyboards and a funky bass line as well as some solid, chunky, chopped off riffs.


Next song, “The Fallen”, bursts out in a total frenzy of a riff before developing into a song with a fairly intense piece of drumming from Fabio Costantino. It still manages to keep its melodic feel and again the guitar and keyboard parts are technically very good, especially on the solo’s. Costantino probably needs an oxygen mask after playing this live.....


Title track “The Passage” again follows the meaty riffs/technical guitar and keyboard with a melodic undertone formula. It may sound a bit similar to previous songs but DGM have got this down to a fine art and it never feels old.


“Disguise” is the runt of the litter on this album. A piano and vocal ballad weighing in at 1min 57 secs it feels a bit lost. As a full length ballad or used as a quieter section in another song it would’ve worked much better which is a pity as it’s really well done.


The techno keyboard intro to “Portrait” may have you reaching for the skip button but hang on as it explodes into a thrashy riff, drums and bass combo before they drift back into the more melodic mid tempo middle section again, before finishing as it started.


Track nine “Daydreamer” starts with a fairly standard metal riff before a seriously funky bass and guitar line take over. There is a serious groove to this song which is a nice departure but it still maintains that alternating heavy and melodic rhythm.


“Dogma” features Michael Romero on guitar and is a full on assault on the eardrums. The added double kick drums and bass line means this song fairly gallops along with some excellent shredding in the string bending solo trade off between Romero and Mularoni.


Final song “In Sorrow” is a ballad with a mixture of acoustic guitar and keyboards. The intro sounds slightly reminiscent of ‘The Unforgiven’ and a sweet solo compliments the song nicely.


Overall this is a very good album for its genre and the band are clearly great musicians who have honed their craft over the years. Fans of Symphony X and maybe even Dream Theatre might just get a kick out of this.
Review by Andy Gillen