ALBUM REVIEW: Tyketto 'Reach' for glorious past and launch into a new future

WITH 25 years having passed since the release of ‘Don’t Come Easy’ Tyketto are due to release new album ‘Reach’ on 14th October.

And, it does live up to the mighty legacy of the band.


Having toured extensively for five years playing venues as diverse as The Diamond Rock club in Ahoghill Northern Ireland to US rock cruises the new line up of Danny Vaughn - vocals, Michael Clayton Arbeeny - drums, Chris Green (Pride, Furyon, Rubicon Cross) - guitars, Ged Rylands (Rage of Angels) - keyboards and Chris Childs (Thunder) - bass, decided to decamp to the Rockfield Studios in Wales, famous for Queen and Rush and many recording there, to lay down some new material, their first album in 4 years.
So how would the new additions fare?


Album opener ‘Reach’ is an easy tempo opener with a mix of acoustic and electric guitar that has a bit of a Queen feel to it. It also features a nice keyboard line from Rylands and Green hints at what’s to come on the rest of the album with a really sweet solo. 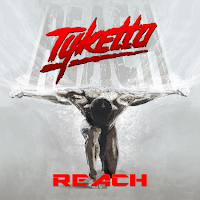 ‘Big Money’ is the first sign of a heavier Tyketto sound with a mid to fast tempo riff and driving rhythm section. It features a slower middle section before building to a really smooth solo from Green.


Track three, ‘Kick Like a Mule’ does exactly what it says on the tin with a fast paced tempo to it. An acoustic section hides the fact that an awesome riff and solo are to come. A great song.
“Circle The Wagons” is the first power ballad on the album with a nice clean guitar tone from Green and complimentary keyboards from Rylands. Again Green the mark on his solo and you begin to reaffirm for yourself what a fantastic vocalist Danny Vaughn is. His vocals throughout are right on the money, no more so than on next song ‘I Need it Now’, where his delivery and diction are just about perfect. The huge chorus and back ground vocals have Tyketto stamped all over them.
‘Tearing Down The Sky’ is another song with a huge chorus. A slow intro with a great riff and solo where Green gets to flex his shredding muscles.
‘Letting Go’ is a lovely mid tempo acoustic song with great melodies and more fantastic guitar work from Green (There may be a theme developing here....)
Track eight, ‘The Fastest Man Alive’ has a great hard rock groove to it slightly reminiscent of Extreme. The funky guitar and rhythm section really makes this song.
‘Remember My Name’ has a down’n’dirty feel to it which is only added to by a bit of harmonica. The harmony vocals again are fantastic on this.
‘Sparks Will Fly’ is another song with some serious funk and groove to it. Some nice bass from Childs and background vocals are the perfect platform for Greens guitar work.
‘Scream’ is on the surface a guitar led ballad but Rylands’ keyboard prowess coming to the fore. It also includes a nice string arrangement. The highlight though is Vaughn’s passionate and moving vocals.
Final song ‘The Run’ has an acoustic intro before developing into a definitive Tyketto song, a bit of a throwback to Don’t Come Easy.
The addition of Green, Rylands and Childs has given the band a new lease of life both live and artistically.
Don’t Come Easy has been lauded as one of the best albums in its genre since its release. It would be no surprise if, in time ‘Reach’ is held in the same high esteem.....it really is that good!
Review by Andy Gillen
Posted by Jonny at 9:32 am