AFTER headlining a North American tour earlier this year, and appearing at premier festivals across Europe all summer, Amon Amarth is ready to launch their new video.


'Raise Your Horns' features live footage from their San Diego, London, Paris, Tilburg, Berlin, and Hellfest shows, as well as clips of fans, artists, actors, sports stars, and friends raising their own horns to the band! 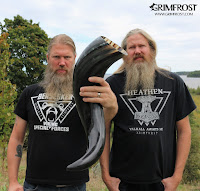 Watch the video at the competition link below and try to spot all these guest stars.

Starting today, fans also have the chance to win a Grimfrost prize pack, including their owncarefully polished and cleaned top quality Viking drinking horn (which holds 4 liters, 8 pints or 128 oz)! The grand prize winner will also receive a Berserker t-shirt, Heathen t-shirt and a stainless steel Wolf King Chain with Grimfrost’s Thor’s Hammer necklace, all featured in the photo below.


Presented by Amon Amarth in partnership with Grimfrost, the contest is open to the global public, and ends on October 10th @ 5pm UK time. To enter, please visit: www.amonamarth.com/raiseyourhorns and merely submit your email address!
Grimfrost is a Swedish company dedicated to making and selling the highest quality Viking reproductions on the market. Their products range from hand-forged axes and jewelry to beard oil and Viking inspired t-shirts. For more information, please visit: www.Grimfrost.com
Continuing their worldwide tour in support of acclaimed new album Jomsviking, Amon Amarth will head back out on the road starting October 28th with support from Testament and Grand Magus. The Irish date is on 2nd November in Dublin.


Amon Amarth released their 10th full-length, Jomsviking, earlier this year. As the band's first concept record in their storied career, Jomsviking tells a tragic, original tale of conflict and revenge, backed by the Swedes' trademark melodic, anthemic metal - which was produced and mixed once again by Andy Sneap (Megadeth, Testament, Accept). For their efforts, Amon Amarth swept into some of their highest chart positions to date across the globe (including a #11 spot on the USA Current Album Billboard Chart). To purchase and preview Jomsviking, please visit amonamarth.com, where the album is available in various formats, and previous videos for "At Dawn's First Light" and "First Kill" can be viewed.