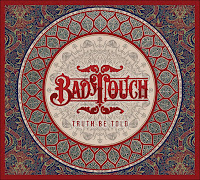 The new album, which was recorded at Mwnci Studios in Wales, features the singles ‘99%’ and ‘Made To Break’, both remixed for radio by the legendary Rolling Stones engineer and co-producer, Chris Kimsey. Both singles will be accompanied by official music videos. (see 99% below).

“99% is a great song to ride around in cars and drink beer and smoke pot and listen to rock and roll on the radio,” says Chris Kimsey. “Not that I drink beer or smoke pot , but I remember the simplicity of music and life so it’s good to hear it is alive and kicking with Bad Touch.

"I heard something that evoked a good time melodic love song. It just needed some re arranging and mixing to get to the heart of the song.”