FOR many of the contributors to this and other similar sites being of a certain age our heritage no longer means where we grew up and the culture of our predecessors. Now it means the rock and metal that we have loved since the first riff wrested us from the mediocre mainstream.

Icelandic metal monsters Skälmöld take on board that metal heritage and much more. Rooted firmly in the land of their birth they have always kept true to the Norse mythology in everything they do this is a heritage of a bleak beautiful landscape and venturing forth as conquerors and explorers. 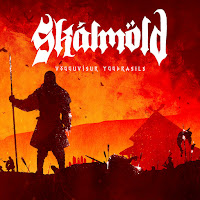 Now on their fourth release, 'Vögguvísur Yggdrasils', they stay true to their conviction about singing in their native tongue and rise yet further.

Forget any clichés you may have about 'Viking metal' because Skälmöld are much, much more. On this album you have black metal., death metal, classic metal, blackened melodic death metal and even folk metal; you have gruff growls and sweet clean singing. Combine all that and it shouldn't work. But in Skälmöld's hands it not only works, but excels with a sheer sense of epic musical theatre.

The album is based around the Nine Worlds but we will have to take the band's word for that as we haven't got a Scooby Doo what the words are (Editor's note: We will be sending contributors on an Icelandic language course).

From the full on opener 'Muspell' to the nine minute plus closer 'Vanaheimur' the 12 legged beast of a band do not put a foot wrong.

'Nidaveillir' is a folk-ish metal tune, with no attempt to add a range of weird instruments, merely  catchy riff, chanted call-outs and metal beating in every smash by drummer Jón Geir Jóhannsson.

All six members contribute vocally, led by Björgvin Sigurðsson with a might that will impress Odin and gain a nod of approval from both Thor and Loki.

The combination of three guitars of Sigurðsson, Baldur Ragnarsson, and Þráinn Árni Baldvinsson work on synchronous level with riffs, harmonies, counter-harmonies, and solos that showcase what shredding should be - a compliment to the tune, not an end in itself.

And, it is that idea, that the tune, its reflection in a musical and lyrical master stroke that the best of metal should always aspire to.

The keyboard wizardry of Gunnar Ben is deployed in the right place, while the bass rumble of Snæbjörn Ragnarsson keeps all in check.

Songs such as 'Utgardur' have a heft few can match - elemental and with a sheer sense of scale.

'Alfheimur' opens with a riff that sound like it should be played when the All-Father leads his armies into battle. If Marvel ever hear this song they'll sign up Skälmöld to pen the soundtrack of every film with even the merest whiff of a Viking connection.

At the same time 'Asgardur' has an opening that will have Amon Amarth re-assessing their next album. Vocally and musically this is Norse, this is folk, this is metal and with Skälmöld this is a true reflection of the land and the heritage of Iceland. All with a solo that will make you weep with joy that kicks in three and a half minutes in and holds you for a full 25 seconds wishing you could write and play that well.

However, when it comes to 'Vanaheimur' the scale of Skälmöld's achievements are really evident. If the rest of the eight tracks weren't so damn good it could over-shadow the rest of the album.

From the off you sense something special, you sense there is despair and hope. There is an intense sense of Norse mythos as Gunnar's keys lead into a mid-section that builds, grows and leaves listeners with a sense of anticipation as to what the remaining four minutes will hold. Hypnotically heralding a climax - it has a cinematic feel that swells until you can barely contain your excitement.

Really it is that good.

This is the music that warriors gather in the halls of Valhalla until they once more pick up their weapons in readiness for Ragnarök, that last great battle.

On 'Vögguvísur Yggdrasils' Skälmöld have produced not only a contender for album of 2016, but an immersive metal experience, an musical ode of a greatness few can compete with. First listen will have you hooked, then it will be stuck on repeat and repeat as if Jörmungandr - the world serpent was dragging you, not to death, but to ecstasy.

Venture forth metal warriors with Skälmöld and the worlds will lie at your feet. 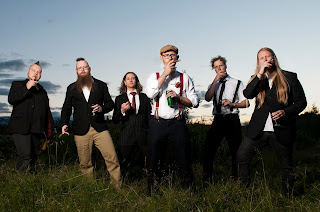